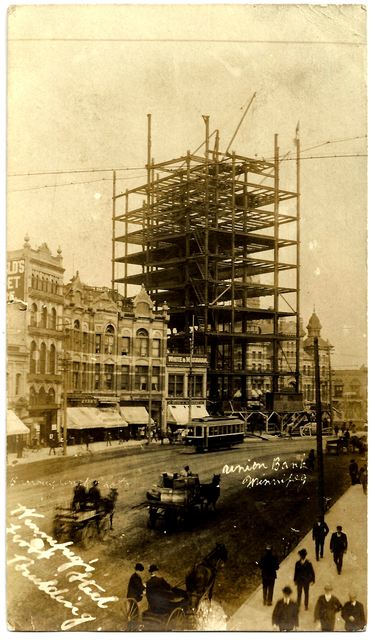 The Bijou Theatre opened in 1904 originally as a vaudeville house, interspersed with showings of Edison kinescopes. The theater was part of a block of buildings built in 1884 on the foundations of an old court house and jail, and, in fact, there were still two jail cells that survived in the basement of the theater from the old courthouse building that once had been there. In 1908, it was renamed Empress Theatre

In 1910 the Empress Theatre discontinued vaudeville attractions and continued with a movies only format, usually double bills of sub runs, and was reverted back to Bijou Theatre. It never had an organ but a Photoplayer was installed in the theater in 1915 to accompany silents.

Over the years, the theater suffered from a deterioration of the area and dwindling attendance. The Bijou Theatre closed in 1956. A pool hall occupied part of the theater for a time after that. The entire block of buildings that once housed the theater and other businesses burned to the ground in 1979.

A few years later and the Bijou Theatre might have survived had it not burned. Considerable urban renewal flourished in the area in the 1960’s and afterwards. A new city hall was built less than half a block from the theater in 1965, followed by a concert hall, museum and planetarium across the street. The city took ownership and restored the Pantages Playhouse located nearby. That redevelopment has sparked rejuvenation projects of other historic buildings in the area.

A couple of corrections. The Bijou was located at 498 Main St, not 438. The Photoplayer from another local theater ended up in Ontario, not the one from the Bijou. That’s what I get for trying to read a blurry, yellowed photo of an old newspaper article covering the 1979 fire that levelled the theater and surrounding buildings.
There had been a short-lived earlier theater on this site, occupying space in the old courthouse/jail building before it was demolished. Known as the Royal theater, it offered vaudeville and burlesque, but had an unsavory reputation, since it included a saloon, as well as a house of ill repute. This ‘theater’ along with the rest of the old courthouse was torn down in 1881 to make way for the building that eventually housed the Bijou.

Here is an August 1945 ad from the Winnipeg Free Press:
http://tinyurl.com/2fza9o

I’ve found a period source which adds a missing piece to the early history of the Bijou Theatre as told here and at Theatres of Winnipeg. The source is the 1913 edition of Western Law Reporter (Canada), which gives a synopsis of a 1912 court case involving events that took place in 1910. The details of the case are not relevant, but the following sentences are:

“On the 21st April following the date of the contract, the lessees of the Empress Theatre vacated the premises and removed all their plant (excepting the drop curtain, which did not fit the new building) to another building, in another street in Winnipeg. The new building was given the name “Empress Theatre,” and the building vacated was afterwards known as the “Bijou.” The Empress, both in the old and in the new building, was what is generally known as a vaudeville show, while the Bijou was run as a moving picture show.”

As the Empress, this house was part of the Sullivan & Considine vaudeville circuit, which used the name Empress for most of its theaters. The Bijou joined the circuit in 1908, when the October 3 issue of The Billboard said:

“Mr. and Mrs. Frank Fairchilds are touring Western Canada and meeting with great success. They are playing a new circuit formed by J. M. Nash of the Bijou Theatre, Winnipeg, and booked through the Sullivan and Considine office.”

The Bijou probably adopted the name Empress shortly after joining the Sullivan & Considine circuit, so must have had the name for less than two years, until it was moved to the former Dominion Theatre in 1910.