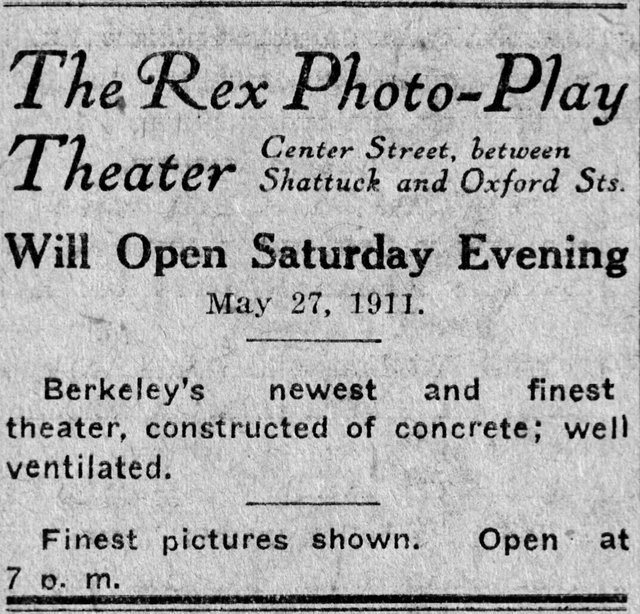 The Rex Theatre was listed at 2135 Center Street in the 1914-1915 edition of American Motion Picture Directory. The Rex Theatre, first known as the Rex Photoplay Theater was opened on May 27, 1911. It was closed in January 1916.

Since demolished the site housed a Bank of America and parking lot. In summer of 2020 a hotel is being built on the site.

It was located at 2137 Center Street, Berkeley CA

This would be right across the street from the current Act ½(2128 Center St)—Site holds a Bank of America now. Theater closed/demolished for this.

The Rex Theater opened on May 27, 1911. According to the July 22 issue of Moving Picture News it was “built for, and not adapted to the business”, becoming the first purpose-built theatre in downtown Berkeley. In addition to being listed in the 1914-1915 American Motion Picture Directory, it can be found in the 1912 thru 1915 editions of the Berkeley City Directory.

A regular advertiser in the Berkeley Gazette, ads for the Rex ceased after November 27, 1915. The Gazette at the time carried a list of local amusements on its editorial page, where the Rex continued to be listed for several weeks, disappearing after the January 3, 1916 issue.

Long demolished, a previous comment mentions a Bank Of America and parking lot occupying the site (The Rex address was actually the eastern end of the parking lot), they have since been replaced by a hotel that is currently under construction.