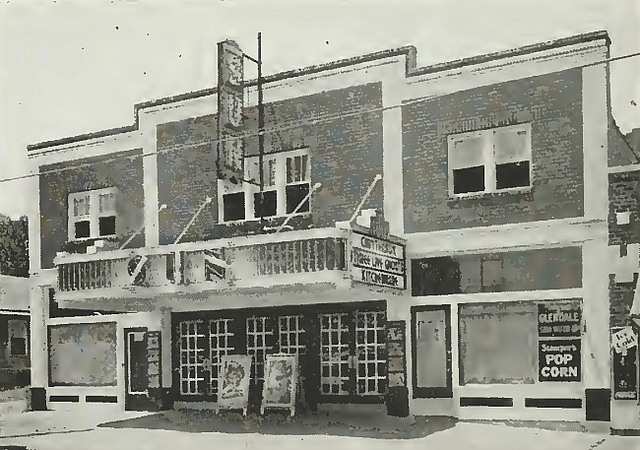 Does this theater building still exist, or did Bruce Watkins freeway take it out?

The SUN existed in the 1930’s. We lived nearby on South Benten from 1928 to 1937, and I recall going to Saturday afternoon matinees there. Sometime in that period, there was a dispute between union and non-union projectionists, and the booth, above the entrance on Prosopect, was dynamited during the night.

I used to go to the Sun a lot when we lived at 67th and Chestnut. (I often also rode the bus down to 39th and went to the Oak Park, but I never told my parents that).
There was a drive-in restaurant (an Allens?) on the NE corner, a school on the NW corner, and a drug store or hardware store directly across the street.
And when you drive down that part of the freeway today, Prospect is on one side and Chestnut on the other.

Believe it or not the old Sun theater is now a church. Kansas City is known for turning its old theaters into churches.

On the northeast corner today there is a Church’s Chicken. Before that there was a Sherman’s barbeque restaurant(very good barbeque,too). I went to Blenheim School on the nw corner in the third grade. Bruce Watkins freeway is a block east.

The Sun Theater was also known as the Mayfield Theater.

The Boxoffice article Tinseltoes linked to says that Al Hauetter was the architect for the 1937 remodeling of the Sun Theatre. David and Noelle’s list of known Boller theaters lists the Sun Theatre in Kansas City as a 1941 remodeling project. Why the house was remodeled twice in four years I don’t know.

The 1941 project might have been a belated exterior remodeling, since in the 1937 photo from Boxoffice it looks like in Hauetter’s remodeling the old front was retained and merely given a new paint job. But without a photo from 1941 or later there’s no way of telling if the house got a new front in 1941.

The church that now occupies the building has a wooden false front that covers the upper portion of the facade, and the lower portion is mostly covered in some kind of stone veneer that might date from the 1940s but might be later.

This opened on December 25th, 1926 as Sun. Grand opening ad in the photo section.