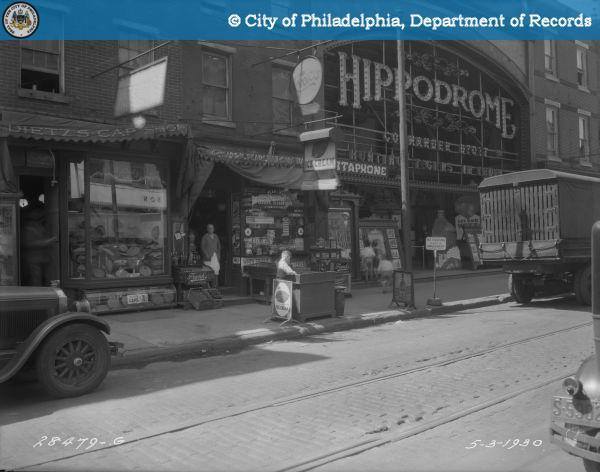 In 1925, the firm of Hodgens & Hill was hired to remodel the Hippodrome Theatre, and with an increased seating capacity of 600, it was possibly at this time that Warner Bros. Circuit Management Corp. took over the operation of the theatre. They equipped the Hippodrome Theatre with a Western Electric(WE) sound system, but it was closed in 1931. It was still listed as a Warner Bros. owned theatre in the 1941 & 1943 editions of Film Daily Yearbook, but still listed as (Closed), obviously never having reopened.

Later demolished, a new building on the site of the Hippodrome Theatre was occupied by Tower Records, but by 2012, this had closed and the premises were vacant.

The Tower store building was a rock venue under the Ripley Music Hall name during the first half of the 1980s. Before that it had been a menswear store called Ripley for quite a few years.

I thought this was Grendel’s Lair in the early 80s. Was the Ripley Music Hall in the same block of South Street?

Well, I went through all of the Philadelphia theaters listed and didn’t find the one I was looking for. During the 1981 Septa strike, I used to ride my bike from 44th and Walnut to Broad and Snyder (!) to go to work. Part of my route took me down South Street from around 20th to Broad, where I would turn right to go to South Philly. At that time, South Street from the river to about Sixth was a lively area. After Sixth, though, the neighborhood deteriorated. If I recall, on South between Fifteenth and Sixteenth there was a ghost of a movie theater in a block full of abandoned buildings. I can’t think of the name of the theater to save my life, but it had obviously been closed a long time. I looked forward to seeing that old theater every time I had to pedal through Center City, cursing Septa all the way. If anyone remembers this theater, or knows if the site has been renovated, let me know. Thanks.

You are absolutely right. The Royal was the name of the theater. Thanks for the information, Charles. I can stop wondering about that place after twenty years.