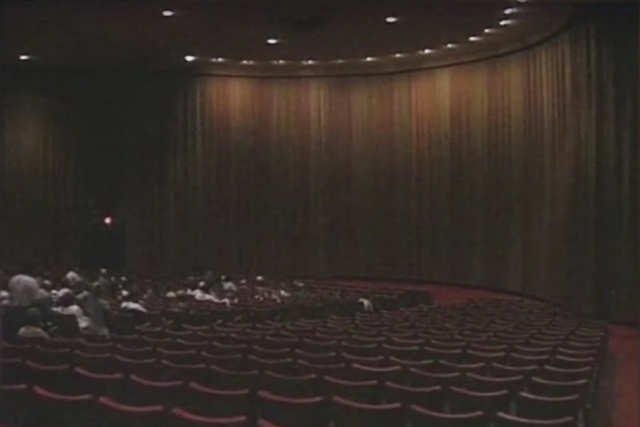 Located in the North Hill Shopping Center. The North Hill Cinerama Theatre was open on December 21, 1967 with Barbara Parkins in “Valley of the Dolls”. This theatre shut down for good in 1999.

I saw “Jurassic Park” here. If I remember right it was in 70mm. Anyway, great theatre with a super screen!

The film “Jurassic Park” was the first motion picture by Universal Films to be released in DTS Audio Format. This Picture was in Cinemascope and was in DTS at the North Hill Cinerama. I remember watching this movie here and was very impressed with the DTS at that time..
Arnie N Brown

Jurassic Park was shot in 1.85:1, not in the Cinemascope format. There were also no 70mm blow ups made for the film either, although extremely likely the North Hill was the first DTS venue in Calgary and it also played 70mm in its earlier years. I also doubt this cinema ever played any true three-strip Cinerama, rather 70mm prints projected through a curved lens, as I remember the auditorium did not have the Able and Charlie booth boxes on the sides nor any indiction that they were ever there.

I remember visiting this cinema while on vacation in August, 1999 a few weeks before it closed. It was a dreary, boring looking cinema on the outside at that point, as the adjacent mall was under heavy construction. The lobby was lifeless and drab, with hardly any staff around. “Star Wars Episode One” was playing there throughout the summer. The projector appeared to be on its last knees, as the image was bouncing like crazy (literally no tension in the gate) and staff refused to fix it when I asked because the cinema was about to close. The screen was also notoriously small after the original screen was removed. It was a common-width screen, which meant 1.85:1 films occupied a larger image area and the screen dropped down for scope features. “Episode 1” was shot in anamorphic, and it was kind of depressing seeing such a small, bouncy image in such a large room.

That said, the DTS sound was mind-blowingly awesome and probably the best sound I’ve ever heard in a non-IMAX theatre. Dialogue was clear, surrounds were powerful and effects filled the room, and the bass was deep, thunderous and rumbled the seats. It made up for what was a slightly disappointing single-screen cinema that could have been so much more.

The North Hill Cinerama was a great place to see a movie in the 1970’s when I would go there. I agree with Jason Whyte that the cinema was only set up to show the single frame Cinerama. (See the documentary on the new Blu-ray DVD of “How the West Was Won” for the full story on this. I did see a 70mm version of “This Is Cinerama” there in the mid-70’s.

Inside – nothing but gold curtains – just like many of these Cinerama theaters. Check out the shots of auditoriums in the documentary mentioned above.

The last of Calgary’s big movie houses. The final film shown was the Special Edition of Star Wars Episode IV. The basement was a bowling alley. Demolished as part of a redevelopment of the mall, basically to make way for more parking. The pedestrian overpass over 16th Avenue is immediately west of where the theatre entrance used to be. I attended the Calgary premiere of Jurassic Park here. A real loss.

The same theatre of the same design opened as the Fox in Lubbock TX. Almost the same grand opening ad as well. 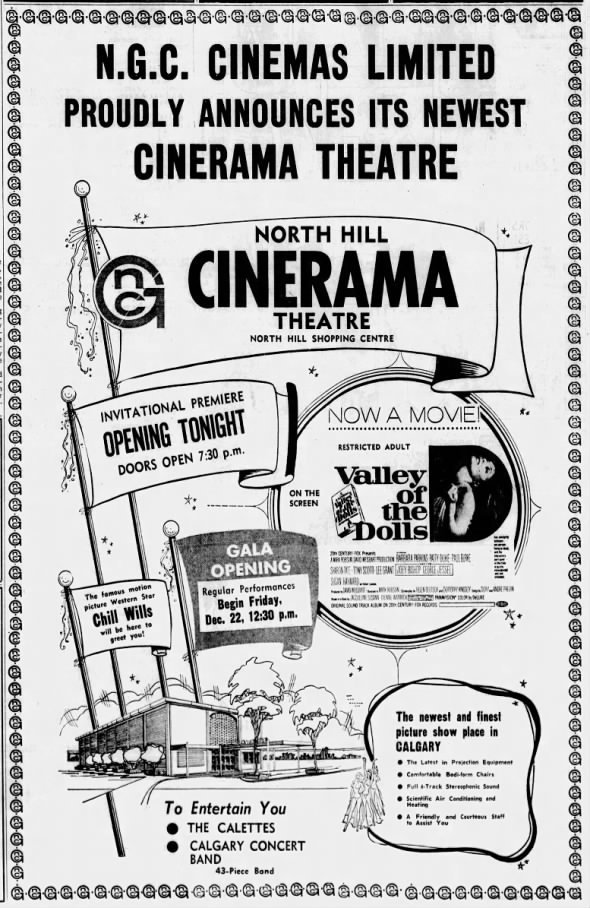