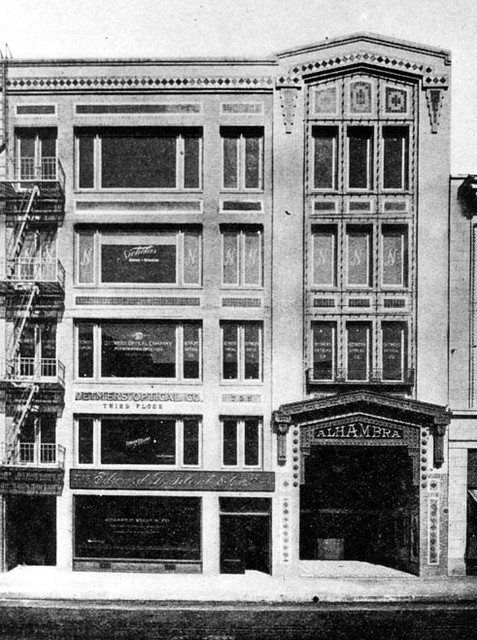 This theater was owned by Edward D. Silent, and designed by Los Angeles architect Silas Reese Burns. It was attached to a five story office block called the Silent Building. The Alhambra Theatre was opened on October 5, 1913 with Marie Walcamp in “The Girl and the Tiger”. It was operated by the Tally Amusement Company, headed by E.J. Tally. In August 1915 it was leased to Fred Miller and was renamed Miller’s Hill Street Theatre. By June 1918 it had reverted back to the Alhambra Theater name. It was one of several theaters which once lined S. Hill Street in downtown Los Angeles, most of which are gone. None of those which do survive are currently operating as movie houses.

The site of the Alhambra Theater has long been occupied by a parking lot.

The Alhambra Theatre once had a rooftop sign located up the block from the theatre, atop a building on the south side of 7th Street just west of Hill Street. It can be seen at the center of this photograph from the USC digital archives.

Incidentally, though the photo is labeled by the archives as being from 1921, it must be from 1920 or earlier, as demolition of the buildings left foreground on 7th and Broadway, where Loew’s State Theatre opened in 1921, had not yet begun.

Architect Silas Reese Burns designed the Silent Building and the Alhambra Theatre. In partnership with architect Sumner P. Hunt at the time, his firm was called Hunt and Burns.

Repairing dead photo links and adding a new one:

The L.A. Library photo cited in the first comment above is here.

The USC archive picture cited in the second comment above is here.

New: a photograph of Hill Street south from 7th Street about 1931. The blade sign of the RKO Theatre can be seen in the distance, but a bit nearer, just below the rooftop sign for Birch and Smith Furniture Co. can be seen the marquee of the Alhambra Theatre.

Here is a photo recently added by the LAPL, circa 1920. The resolution on this computer IÂ´m using is poor, so hopefully you can make out the theater in the photo:
http://jpg3.lapl.org/pics37/00068236.jpg

WOMAN CASHIER THUG’S VICTIM.
ROBBED AND DEALT BLOW UPON BASE OF SKULL
Lies Unconscious in Lot for an Hour, Then Walks to Her Home Where Medical Attention Is Secured—Accompanies Police on Search for Assailant.

Slugged in the head by a pursesnatcher on Tenth street near Grand avenue, early last evening. Miss Nellie Hartman, a pretty young woman of 25, cashier of the Alhambra Theater, lay in a semi-conscious condition.

The Alhambra Theater has been leased by the owners of Miller’s Theater and will be known in the future as Miller’s Hill Street Theater. It opened yesterday with the Fox production of “Sin.”

Fred Miller was quite active in the business. In 1923 he built the Gateway Theatre in Glendale, and in 1925 the Figueroa Theatre.

He also had something to do with the Carthay Circle. The California Index has a card headed with his name citing an article about the Carthay Circle in the magazine California Graphic of July 24, 1926. And then there’s a card citing an article in the trade publication Exhibitors Herald-World from February 16, 1929, about Fox-West Coast retaining Fred Miller as manager of the Carthay Circle after they have taken over operation the theatre. I can’t find any reference specifically naming the actual owner of the theatre before Fox took over, so it may or may not have been Miller. Maybe there’s a Times article from the era that would tell.

And apparently Miller didn’t remain as manager of the Carthay Circle for very long after the Fox takeover. Another card from the California Index cites an L.A. Times article of May 18, 1930 (part III, page 9) which was headed “Pioneer theatre man reenters field.” That’s the most recent reference to him I’ve seen, so I don’t know how his return went.

I found the following in notes hand copied from Motion Picture World, Vol. 17, No. 13, 27 Sept., 1913 (page 1396):
NEW $65,000 THEATER AT LOS ANGELES
A palatial theater seating 900 people, was opened in Los Angeles recently. It is under the control of the Tally Amusement Company, with E.J. Tally as president and F.J.Kawkins as vice-president. It will be known as the “Alhambra” and will use the Universal program as does Mr. Tally’s other theater, the popular “College” on Hill Street. On the exterior of the “Alhambra” there are 1250 electric lights. The furniture and fittings are magnificent and comfortable.“
T.L. Tally, not E.J., ran the College at this time, though T.L. evidently had a brother named Edward (or Edwin) J. Tally.