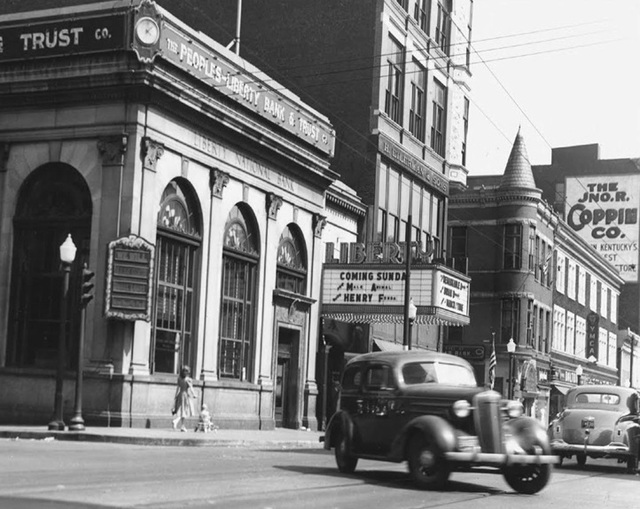 The Liberty Theater opened on July 21, 1923. It was designed by Cincinnati architect Harry Hake. Construction costs were $300,000. The Liberty Theater featured 1,500 blue leather seats on the main floor and the balcony. Other amenities included an Italian marble lobby complete with a miniature Statue of Liberty, mahogany ticket sales booths, a grand marble and brass stairway, a large organ and a large mural of New York harbor painted on the stage.

At the time of the opening, admission ticket prices at the Liberty Theater were 33 cents for an evening show and 22 cents for a matinee.

The Liberty Theater suffered the loss of patrons to suburban multiplexes and drive-in movie establishments. By the early-1960’s, the Liberty Theater was showing its age. The theater closed in the 1970’s and the building was demolished by the Peoples-Liberty Bank to make way for an office addition.

Greetings,
In addition to the post above I to shall add some of my memories of the Liberty Theater.

This was where I saw one of my 1st 3D Movies where the 3D glasses were handed out to watch the movie. The one I recall most was called 13 Ghosts, needless to say I did not show up at home that evening as knowing if I did not my parents would come in search of me and boy did I ever seek that as I was terrified and was not about to walk the few blocks home to 3rd and Johnson Streets. No, not even with friends.

During the late 50’s to early 60’s it was one dime to go to the Liberty on the week-end and there was most always a double feature. This would get you in all day/evening long as well.

Being a resident of Covington, Kentucky since 1950 I know as I went every week-end.

The theater did dwindle due to urban renewal (development) as it was called back then and most of the other local booming specialty shops in Covington did as well, ah such a shame.

Covington was a big city filled with at least 5 shoe stores alone, more specialty shops than one could shop in during one day, and as well as the other more pricey theater up the street on Madison which was called the Madison Theater theatre.

The death of these Grand Theatres as well as the beautiful (yes I said beautiful) Downtown City of Covington died as my Union Steward father had predicted due to the Urban Development and a shopping center (just one building at the time) that was constructed in adjacent Latonia Kentucky called Arlan’s.

While I did not believe my father at the time I sure came to know that his predictions were quite accurate, perhaps a great deal more accurate than the 5 cent Fortune Teller Machine that was housed there on Madison Avenue in Woolworth’s Department Store where the Grande Madam Fortune Teller bigger than life would stare at you and run her hand across the cards while she gazed omnipotently into your eyes before she told you your fortune.

The Liberty had a huge selection of candies, sodas, and sandwiches and even the rest rooms were elaborate, it looked as though the rest room area itself was fit for a queen, I remember it being huge, lounging chairs & couches lining the sprawling lower level that housed it, down a luxurious sprawling staircase, rather scary and cold to a child yet inviting with it’s intrigue.

That area alone presented with an ambiance as though it was expecting some grand lady of grace to bestow (her) Liberty with her presence. It was at the same time somewhat cold and sterile like the scene in The Shining where Jack was told by the apparition in the rest room there to kill his family.

Needless to say the rest room area evoked a subtle fear in me and if I was the only one who had to go I would wait till another girl had to or run like a bat out of Hades and of course be called down by the Ushers that were seemingly lurking in the shadows everywhere.

Ah how time flies and things change. I can still close my eyes and look to my mind’s eye and see that Grand Belle the Liberty with aching thoughts of the past as I once knew it.

When the Liberty closed it was indeed taken over by Liberty Bank which was adjacent to it and not to long after that the Madison Theater up the street closed her doors as well. She hung on a little longer though than did Lady Liberty.

The City of Covington became the owners of the Madison and sold it to a local woman for $1.00 in which the agreement was to be that she would have it up and running within a year, the renovations took many years to complete and while now the Madison is open it is open for events such as Wrestling, Dancers, things of this nature not actually a movie theater as I knew it or one would expect it to be.

Admission to the Madison was 25 cents back in those days gone by. If you begged real hard you just might be lucky enough (if a cute usher saw fit) to be allowed to have a seat on the balcony of the Madison, I was privy only once or twice to this at the Liberty.

When the Liberty and all of the businesses in Covington were booming there was so many stores it was beyond comprehension at all the activity that was present within the city.

On the week-ends (near holidays) there was actually a circus tent type structure that was set up on 7th Street at the corner of Madison where children who to small to be sent off to the movies alone could be tended to and entertained with cartoons and clowns and such so parents could shop without the children, yet know they were indeed in safe hands.

This was especially helpful when parents did Christmas shopping or Easter shopping for the children. My how the times have changed have they not?

As well both the Liberty as well as the Madison had a strict no blacks policy that held up just about until their doors closed as I was from a bi-racial neighborhood (where the IRS is now) I could never understand at the time why my black friends could not go to the movies with me on the week-ends.

Should anyone who reads this and find it intriguing or should it put a smile on your face or an ache in your heart from reminiscing as I am right now and would like to share their stories with me regarding the Liberty or Madison, or growing up in Covington in general please feel free to email me at the email address below.

The bots on here may remove my email address from this post so I shall put it in a spaced format as follows as well…
i2amfaceless AT hotmail dot com :)

Hello, I worked as an usher primarily at the Liberty but sometimes on busy Sundays at the Madison from June 1967 til Oct 1968. We didnt make much money, 75cents an hour but we had the perk of seeing all those great films at that time for free. Having spent my childhood years as a customer there it was a dream come true job. I had just turned 16, the legal age for working in those days.
My first Saturday working the Liberty was a madhouse. People from all over NKy would come into Covington to shop & drop the kiddies off
at the movies for the day. There were so many kids it was often difficult to maintain order.
As I recall during my time working there we only had that great balcony open a few times. We opened it for Bonnie & Clyde and for The
Good, The Bad & The Ugly at Christmas of ‘67. Saturday & Sunday were
always our busiest days. Late in the evening we would sneak a smoke
sitting on the steps leading to the balcony with Lady Liberty & her
orange light bulb torch watching over us from her niche.
Back then the seats were recliners with 2 positions, rare for a theater in those days. some great films played while I worked there.
The Dirty Dozen, the 2 I mentioned above, Born Losers ( a motorcycle
gang pic that was the first Billy Jack movie), El Dorado, Rough Night
In Jericho to mention a few. Except for Good, Bad & Ugly we always
had a double feature plus short subjects. A box of plain popcorn was
15 cents & a big cup of buttered popcorn was 25 cents. Each had a penny tax added for the new Ky sales tax tho many kids never seemed
to have that extra penny. A lot of times the concession ladies or ushers would kick it in for them.
Going there as a child ( I only lived a couple blocks away ) I recall the balcony being open on many occasions. I recall being in the balcony & being scared out of my wits watching the axe murderer
movie Strait Jacket starring Joan Crawford & Diane Baker. Spending
many an afternoon watching those dubbed into English Italian sword &
sandal flicks. Not to mention all the westerns, war films, monster &
cops n robbers films. Just a fabulous place to kick back & be greatly
entertained for 4 hours or so. And if you missed the beginning of a
movie well just stay in your seat until you saw it. You could stay all day w/o ever having to leave or ante up another quarter or 50 cents.
When I worked there both the Liberty & Madison were owned by the Hill Bros. of Hill’s Seed Co. I believe they also owned the Dixie
Drive In & another Drive In too. It was a great time to live in
Covington & to go to 2 such great theaters. I think the date for the
Liberty closing above may be in error. I seem to recall it lasting
until sometime in 1971. I have the fondest of memories of both those
theaters & Covington in general back in those days.

http://www.nkyviews.com/kenton/kenton1526.htm
Based on this picture and the previous one, is it possible that there were two Liberty Theaters in Covington?

L.B. Wilson was named with the initials of his mother, Lyda Beall Miles, who died from complications of his birth. Being short in stature, it was often joked that “L.B.” stood for “little boy”. He and his brother, Hansford, were vaudeville actors as youths growing up in Covington. They traveled across Europe with a vaudeville company in their late teens. Hansford would go on to become an actor on Broadway.

In 1911, L.B. got a job working for Orene Parker as manager of the Colonial Theater, a vaudeville house. He left due to feeling underpaid. A couple years later, Parker invited Wilson to his office at Madison and Pike to offer him a new contract. Wilson refused the offer, saying he was making more money selling cigars (he owned a cigar shop). As he was leaving Parker’s office, he remarked that someday he would build the nicest theater Covington ever had at Madison and Pike. Almost 10 years later, Parker’s building burned down and L.B., along with department store owner Frank Thorpe, purchased the lot. The bank and theater began construction in 1922 and the theater opened on July 21, 1923.