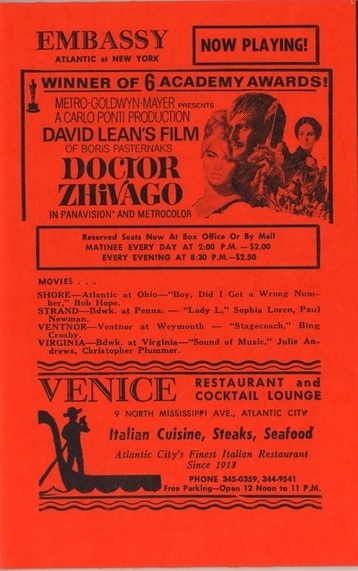 The Embassy Theatre opened in 1941, with a seating capacity for 1,485, all on a single floor. It was the third, and final theatre in Atlantic City to bear the Embassy name.

I remember those Roman columns out front. Large and grey. The other theater (Capitol?) was practically next door.

Funny how there can be so many theaters in one town and then they all just disappear. I suppose it had to do with the decline of Atlantic City’s population in the sixties and seventies.

The cover plate of the Modern Theatre section of Boxoffice Magazine’s issue of November 7, 1942, featured a photo of the standee-foyer area of the Embassy Theatre in Atlantic City. A caption on a later page says that it was designed by architect Armand de Cortieux Carroll. The auditorium was rather austere, but the photo gives a glimpse of a nice little Moderne lounge with bench seating on the other side of the standee area.

The Embassy was already closed when this photo was taken in 1981:
http://tinyurl.com/dgehol

It looks like there were actually three Embassy Theatres in Atlantic City, and it was an Embassy Theatre built in 1911 that later became the City Square Theatre (during the silent movie era- probably when the Embassy on the Boardwalk, later to be the Warner, opened), then the Shore Theatre (1947) and finally the Beach Theatre (1952.)

This Embassy, the last Atlantic City house of that name, opened in, or shortly before, 1942, with a newly-built auditorium accessed through a lobby located in the former bank building (see my comment of March 3 above.)

Also see my comment of today on the Beach Theatre page for further clarification. The aka’s on this page need to be removed, as this theater apparently never operated under any name other than the Embassy. The aka’s need to be added to the Beach Theatre page. Also, the name of the Embassy’s architect, Armand de Cortieux Carroll, needs to be added to this page.

Can anyone pinpoint for me which of the four corners this theater was on, please?

I would say east and north.

That’s because I live on the west coast now. On the east coast going away from the beach is west, so northwest
would be correct..

Why does the overview page for this theatre show a Google street view of the current ground site instead of any of the vintage photos of the Embassy that have been uploaded to the photos section?