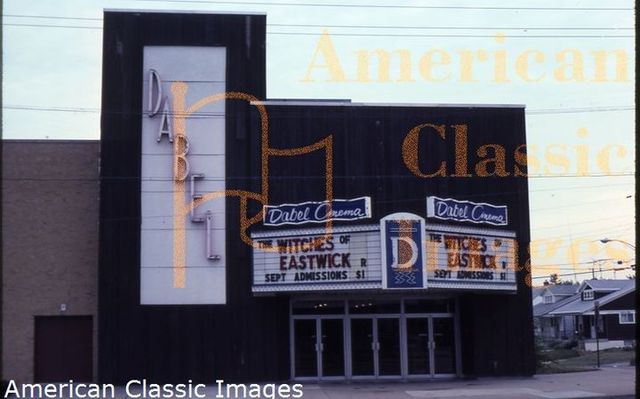 On April 22, 1947 Mid-States Theaters Inc. opened the Da-Bel Theatre with Humphry Bogart in “Dead Reckoning” and Penny Singleton in “Blondie’s Big Moment”. It was built at a cost of approximately $125,000. A contest was held to pick a name for the new theatre. Thirteen year old Carol Deitz and Mrs. E. A. Tinnerman each received $50 for suggesting the name of Da-Bel, a combination of DAyton and BELmont, the neighborhood where the theatre was located.

In 1963 plans were made to convert the Da-Bel Theatre to show Cinerama films. The transition involved the installation of a wide, curved screen. Special wiring and booths to hold three separate projectors were installed in the theatre, which reduced the theatre’s seating capacity from 950 to 742 (all on a single floor). The cost of the changes were estimated to run around $40,000. Projection equipment valued at $60,000 was leased from Cinerama. Cinerama debuted at the Da-Bel Theatre on May 28, 1963, with “This is Cinerama”.

Later known as the Da-Bel Cinema, it closed on September 29, 1992 with Rick Moranis in “Honey, I Shrunk the Kids”. It was demolished in October of that same year.

Gee…
How The West Was Won
Sound of Music
Circus World
2001: A Space Odyssey
Ice Station Zebra
Grand Prix
Krakatoa East of Java
I’ll never forget going in and sitting down, listening to the overture, and then watching those curtains pull back to reveal that huge curved screen as the movie began. This movie palace gave me my love for movies.

Please help me here. Dingoman says he actually saw a movie here in 2001 even though it was torn down in 1992! I moved out of Dayton in 1999 after the drug store had replaced the theater with their own building and it, after that, became a Family Dollar store. Maybe he meant another year for sure?

He’s talking about the Kubrick film 2001.

It was 50 years ago today that “The Sound of Music” premiered at the Dabel. With a reserved-seat run of 105 weeks, it’s almost certainly the long-run record holder for this venue. (Anyone know of something that ran longer?) It was one of ten runs in the United States and at least 24 globally that ran the movie continuously into a third year.

Hey Zookie Freddie. Read Dingoman’s note again. He said he saw the movie 2001 not in the year 2001. Put your glasses on if you can find them and read. 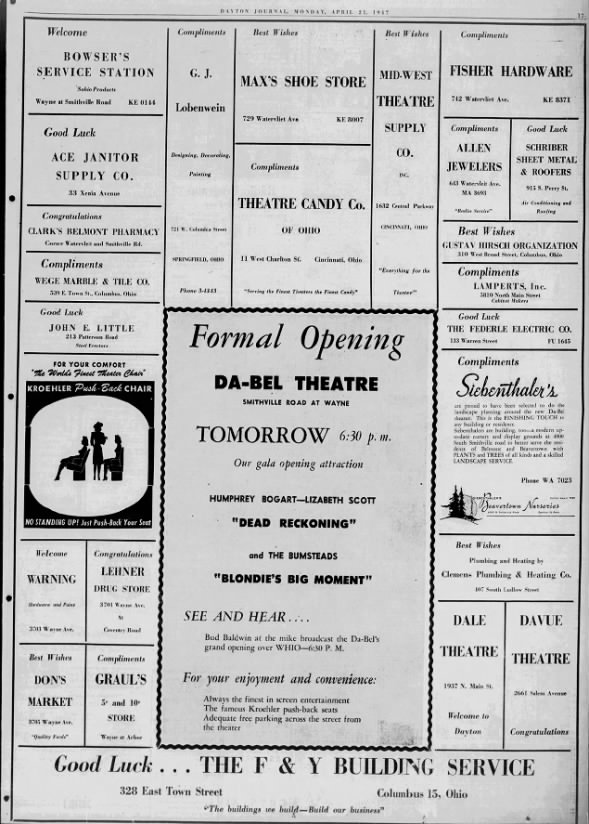 AKA Dabel Cinema
AKA Dabel Theatre

Here’s a new 4-page 50th anniversary FIDDLER ON THE ROOF retrospective featuring a roadshow playdate chronology and historian Q&A. The Dabel’s lengthy run is mentioned in the piece.