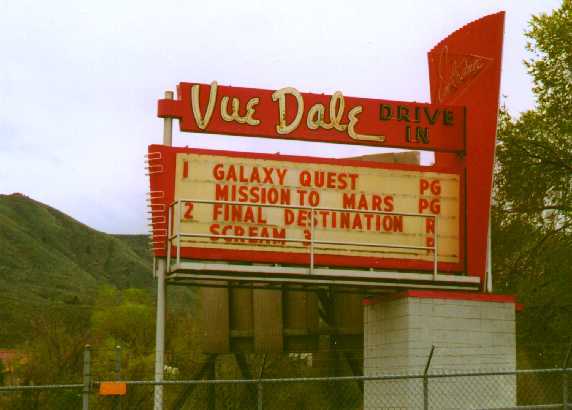 Opened in 1953, the Vue Dale Drive-In was a twin screen drive-in with a capacity for 600 cars.

Operated by Greime and Fasken Theaters in the early sixties.

According to this article, 2010 will most likely be the last year for this nearly sixty-year-old theater. Its owner, Sun Basin Theatres, is signaling that it plans to close it, along with another theater in East Wenatchee, and open a new megaplex in a converted former Kmart by May of 2011: View link

The Vue Dale closed for good on October 3, 2010. The property will be sold for redevelopment: View link

From a Geocities archive, three photos of the Vue Dale, circa 1999: http://www.reocities.com/Hollywood/Pavillion/2216/VueDale.html

There were two drive-in theaters in the Wenatchee area when I was a kid, both owned and operated by the people that ran the Vitaphone theater. The “Auto Vue” drive-in (built first) was at the North end of Wenatchee in the Sunnyslope area. The Vue Dale was in the South end near the Malaga area. As a kid, I only remember the Vue Dale having one screen (at that time).

as of 2018 everythings still intact