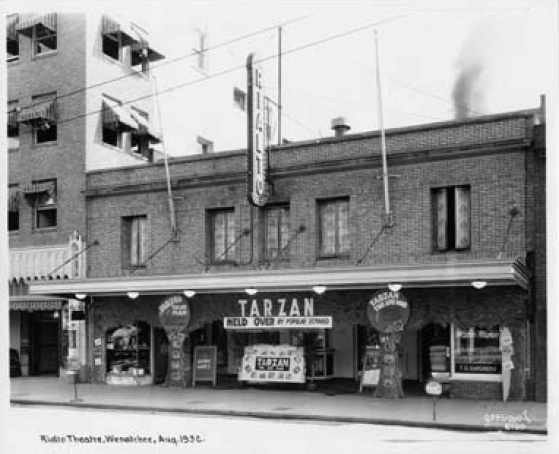 The Rialto Theater opened on May 15, 1921 and a Wurlitzer organ was installed. It was operated by Evergreen State Amusement Corp. in 1941, and was closed on June 12, 1955. The building was used for retail but it is currently empty and ‘For Lease’ in September 2018.

From the 1940s a photo that captured a small glimpse of the Rialto Theater in Wenatchee.

It could have the future Rialto Theatre that was mentioned in the Building News section of the January 15, 1913, issue of American Architect and Architecture: “Announcement has been made that Sheriff J. E. Ferguson will erect a 2-story theater building on Wenatchee and Palouse Sts….”

If the 1913 project was the Rialto, then this earlier item from The Pacific Coast Architect of October, 1912, would also be about the Rialto: “Theater- Wenatchee. Architect J. A. Creutzer prepared plans for a two-story brick and concrete theater building for J. W. Ferguson, to cost $50,000.” (This item got Ferguson’s middle initial wrong. It was definitely E.)

However, in Don’s 1940 photo, the building on the near side of Palouse Street, next door to the six-story building on the corner, has what looks like a theater marquee. The marquee is still there now, and the building is being used as an antique mall. Could this building also have been a theater? The address is 11 N. Wenatchee. As this building is about as close to Palouse Street as the Rialto is, it’s possible that, if it was a theater, this was the 1913 theater project for J. E. Ferguson.

Among the early theaters in Wenatchee that are not yet listed at Cinema Treasures are the Wenatchee Theatre, opened 1905 and operating at least as late as 1925 (and owned by J. E. Ferguson,) and the Majestic Theatre, mentioned in a 1951 Boxoffice Magazine article as an early movie house in Wenatchee, but not mentioned anywhere else that I’ve been able to find. One or the other of them (or neither of them) might have been in the building at 11 N. Wenatchee.

In any case, there’s still information about theaters in Wenatchee that is missing from Cinema Treasures, and I’ve pretty much exhausted the resources available to me. Maybe someone else can make use of these fragments to track down more details.

Well, duh. It finally dawned on me that the building at 11 N. Wenatchee could not have been the Wenatchee Theatre, which was built in 1905.

Also, a list of historic buildings in downtown Wenatchee that I came across includes a Public Farmers Market building at 9 North Wenatchee Avenue. This has to be the same building with the antique mall that uses the address 11 N. Wenatchee. A marquee would not have been unusual on a building built as a public market.

But the Rialto was apparently not the 1913 project for J.E. Ferguson, either. The list of historic buildings comes from a document prepared for the National Register of Historic Places, and there is information about the Rialto in it. Unless the document is mistaken (I’ve known this to happen at times,) the Rialto was built in 1921 and was designed by Seattle architect Edwin W. Houghton.