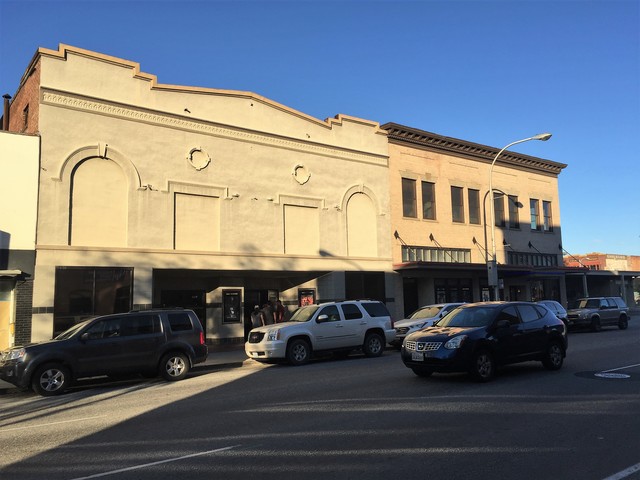 It’s hard to describe how this theatre is still open because it’s not open as the Vitaphone, and it is not its own theatre.

The Vitaphone Theater was built in 1930, opening on June 3, 1930 with Bernice Claire in “No, No, Nanette” with a main floor and balcony. It was designed by George B. Purvis.

Like many theatres, it was twinned in the 1990’s by enclosing the balcony for a second screen.

The Vitaphone Theatre’s marquee is gone, and the theatre has been combined with the nearby Liberty Theatre.

George Purvis also designed the 1925 Columbia Theater in Longview, which has an Italian Renaissance design, and the old Arabian in Seattle (now a church).

In 1963, the Vitaphone was operated by Greime & Fasken Theaters of Wenatchee. Other theaters in this chain were the Omak in the city of Omak and the Auto-Vue, Mission and Vue-Dale in Wenatchee.

The facade on this theater doesn’t belong to a building built in 1930. Both the shape of the parapet wall and the decorative trim that probably marks sealed-up fenestration indicate an earlier time of construction. The Vitaphone Theatre might have been converted from an existing store building in 1930, of course, but there are two other possibilities.

This could be either the former Wenatchee Theatre, built in 1905, or the former Majestic Theatre, no known dates of operation. The Wenatchee Theatre vanished from the listings before 1930. The Majestic was mentioned in a 1951 Boxoffice Magazine article as an early movie house in Wenatchee, but I’ve been unable to find out anything else about it. Somebody with access to local sources might be able to discover more.

It turns out that the building next door north of the Vitaphone Theatre (the one with the sign reading Solomon’s Porch) was also once a theater. A list of historic buildings in downtown Wenatchee lists the structure at 17 S. Mission as the Mission Theatre, built in 1920.

The source of the list, a document prepared for the National Register of Historic Places, also gives a 1930 construction date for the Vitaphone Theatre. I still don’t think it looks like a building from as late as 1930. Maybe it wouldn’t look so old fashioned if it hadn’t been painted entirely grey.