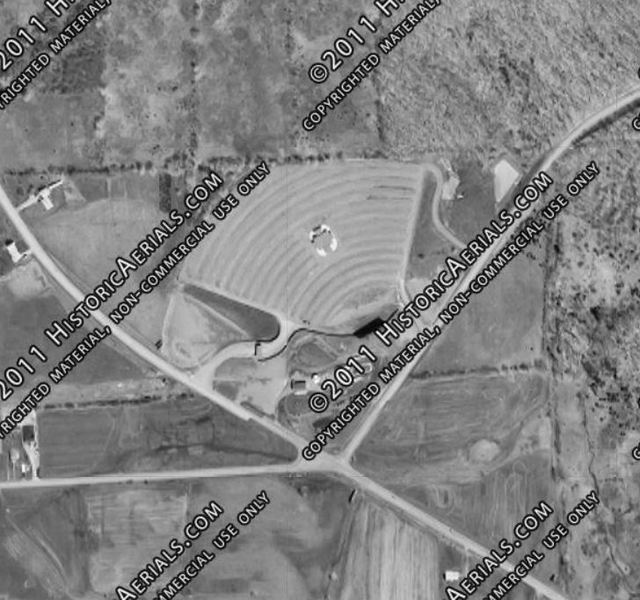 The Airport Drive-In had a ‘soft’ opening in September 5, 1961 with John Mills in Swiss Family Robinson" & Hayley Mills in “Tiger Bay. It had a ‘Grand Opening’ on September 6, 1961 with Troy Donahue in "Parrish” & Stanley Baker in “Hell is a City”. It replaced the Front Drive-In which was torn down to build I-81. The drive-in was located on Airport Road, just below the Broome County Airport. It held 1,200 cars.

Loews moved me to the Binghamton area in 1990, and the Airport Drive-In was limping. I was able to convince my Division Manager to let me revamp the Drive-In–we made it second-run, at a carload price, and did several successful promotions with Wendy’s and an area radio station. We were a hit, and the drive-in pushed on for another three years. We were able to repaint the screen, install FM sound (the AM would cut out when a plane flew overhead!), paint the buildings, and mow down the last 10 or so ramps, which hadn’t been used in years. We actually sold out on a few occasions-one time even delaying flights out of the airport because of the traffic (two lane road)!

After the summer of 1993, Loews opened the Town Square multiplex in nearby Vestal, and we lost the lease on the drive-in because we would not renew two of the single-screen ‘hardtops’ (Cinema Endicott and Towne Theatre Endicott) that the landlord owned. They would not allow us to just lease the drive-in. So the Airport Drive-In sat, fully equipped and ready to open for the season, for about five years before it was demolished!! Of course, vandals moved in…

The first place I ever…um…batted a triple!

I saw a Planet of the Apes series “Dusk ‘til Dawn” marathon here with my first serious boyfriend. I think it was probably the first ever drive-in I went to with my parents (there was also a drive-in in nearby Vestal). I remember seeing the MGM lion roaring and then nothing else because I fell asleep. It was my son’s first and last drive-in experience. He was a baby, so he fell asleep also! The drive-in closed soon after that.

A friend of mine lives near Nashville, Tenn., and in Murffesboro they are building a new drive-in theater, slated to open in August of this year.

I remember reading a newspaper article around the time of its closure about it not being worth fighting to keep open because of rowdyism and crime going on, such as the sale of drugs, in it’s later days. I do remember not wanting to return there after our last visit because of all the “thug” types wandering around. This would have been 1992 or 1993.

This opened on September 6th, 1961. Grand opening ad in photo section and below.

I grew up on the Southside of Johnson City and have fond memories of going to the drive in on Saturday night in the 60’s. Mom made a big brown paper bag of popcorn, candy and soda were also on the menu. Sometimes we went early, because there used to be a small amusement park outside of the drive in, but just below the screen.Was always a treat to get something from the concession stand.We also went to the V Drive in Vestal.

The soft opening was on 5/9/1961. The site is now a drainage retention area. The exit sign is still there, and one speaker post too.

The entrance road is still there too. 1200 cars.