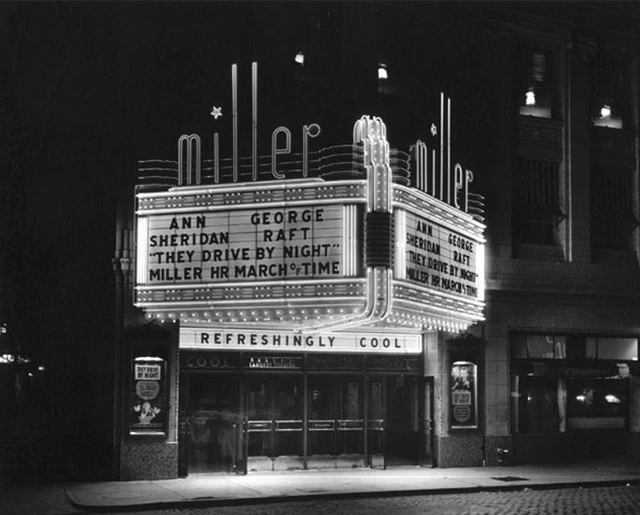 The Miller Theater opened on May 1, 1922 with Rudolph Valentino in “Beyond the Rocks”. In addition to movies, live stage shows, and musical programs, celebrity appearances were also featured. It was equipped with a Wurlitzer 3 manual, 11 rank organ. By 1943 it was operated by Fox Midwest Theatres.

The Miller Theater closed on March 18, 1970. The Wurlitzer organ had been restored especially for the final night and was played by noted organist Gaylord Taylor. It was demolished in 1972. The organ was put into storage and in 1981 it was installed in the Little River Studio and expanded to 19 ranks.

A brief history and vintage clear images of the Miller Theatre can be found in the link below;
View link

Miss Melba,
I think those are store signs. On the northeast corner of First and Broadway a block from the Miller was the Orpheum Theatre. The Orpheum is one of a few surviving theaters in Wichita.

I found out that our Modjeska theatre in Augusta,Ga was a Publix Theatre in 1929 so they had screens everywhere KenRoe.

The Miller opened on May 1, 1922. It’s first movie was “Beyond the Rocks”, starring Rudolph Valentino and Gloria Swanson.

Here is a story about the Miller.

My name is Bob Neale, I was hired with the title of “after school Popcorn boy” in 1953. H. F. “Buddy” Brown was the manager at that time. Frank Young was an elderly black man who wore a spiffy uniform and white gloves and was in charge of every body. He was a mentor to many of the young people that worked at the miller. Knowing almost everyone in Wichita he could get tickets to the shows at the Forum. I married a girl who was an usherette and it has lasted almost 60 years so far.

The Wichita-Sedgwick County Historical Museum has a thread of memories about the Miller.

Boxoffice of March 16, 1970 said that a farewell party would be held at the Miller Theatre on March 18, as a benefit for the local art museum. Organist Gaylord Carter would perform on the Miller’s Wurlitzer, which had been restored for the occasion by members of the Theater Organ Club. National General Corp. were the last operators of the Miller, and would soon open the suburban Mall Cinema as a replacement for the 1922 downtown house. 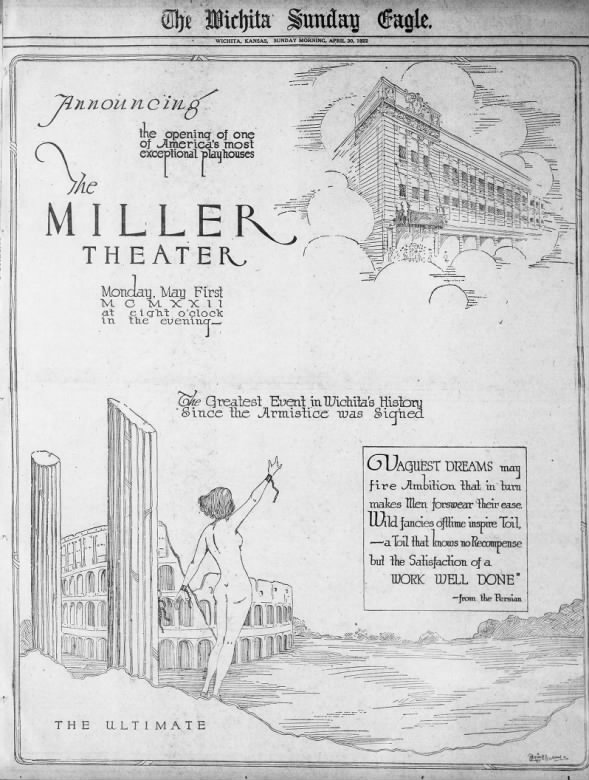