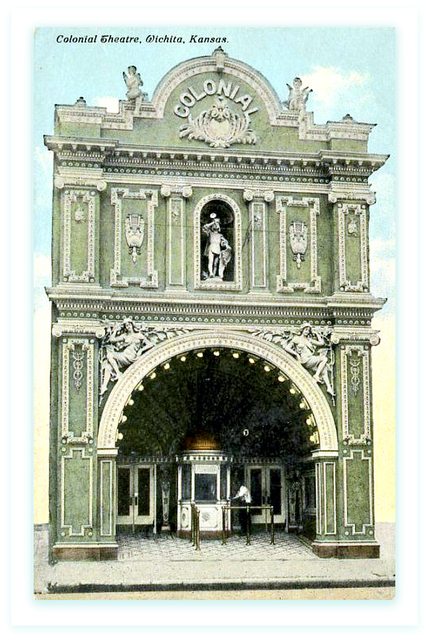 Wichita’s Colonial Theatre was opened around 1910. In 1918 it was renamed Regent Theatre. It was badly damaged by fire in November 1919.

Here is the 1910 photo discussed above:
http://tinyurl.com/8mtx3z

This link has a lot of photos of classic Kansas movie houses,
View link

These web pages have an exciting night shot of the Olonial Theatre –
http://www.davidandnoelle.net/moviehistory.htm

A postcard view of the Colonial Theatre in Wichita Kansas.

This house had been renamed the Regent Theatre by 1919, when the November 2 issue of the Wichita Eagle reported that “[t]he Regent theater building, 117 North Market street, was badly damaged by fire yesterday.”

The Regent had only reopened on September 1, 1919, after an extensive remodeling and redecorating job which had kept the house closed for the entire month of August.

The Colonial was renamed the Regent in 1918.

Both sides of the block are lined with tall, modern buildings, so the Regent has been demolished.

Architect J. Harry Randall practiced in his native St. Louis during the 1890s. Around 1901 he moved to Seattle, where he remained for a few years. By 1909 he had established his practice in Oklahoma City. There’s a hint that he might have moved to California by 1921, but I haven’t been able to find anything definite about that.

This opened as the Colonial on February 10th, 1915

And reopened as the Regent Theatre on February 13th, 1918. Grand opening ad posted.

The February 4, 1915 opening of the Colonial must have been only the opening under the management of Fox’s “Box Office Attraction Company.” The Colonial was advertised in the Wichita Beacon of October 3, 1910, boasting of “…five big pictures, four of them comedies.” This ad was cited in Gerald R. Butters' book Banned in Kansas: Motion Picture Censorship, 1915-1966.