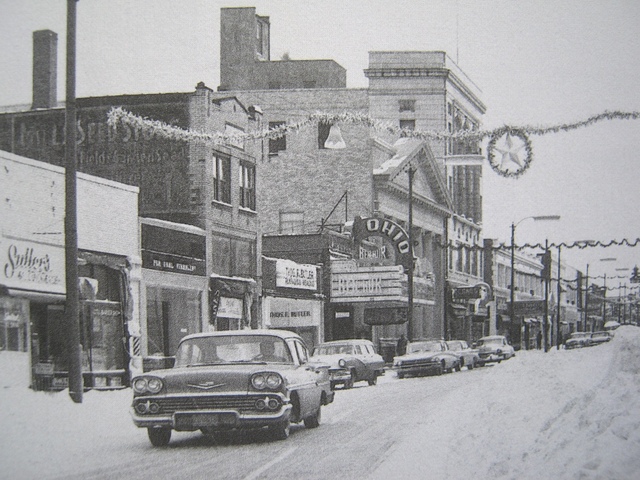 The Ohio Theatre was opened in 1924. The Film Daily Yearbook, 1941 edition gives a seating capacity of 700. The seating capacity quoted in the headers above is taken from the 1950 edition of F.D.Y. It was closed as a movie theatre in 1969 and reopened as an adult movie theatre in 1970. That only lasted until closing again in 1971. It reopened screening regular movies again in May 1973 and closed for good in July 1973 and was almost immediately demolished.

As I said, we showed whatever we could get…we were showing “The Outfit”, with Jim Brown, when it premiered on “The CBS Late Movie”! We closed for good in July, after a run of two months.
The theater was torn down not long after.

“A Small House Receives the 1954 Touch"
Article, with photos, of the Ohio Theatre, from Boxoffice magazine, October 2, 1954:
View link

I remember a lot of Disney films were booked there when I was a kid.

Mr Dick Klein managed it and the Lorain Drive In in 1956. My dad and I hand painted large coming attraction murals in the lobby every week. I was paid 25 cents per hour, age 11. I always was admitted there for free. Sears and Roebuck was just down the street. That’s were I bought my first multi-speed bicycle. I still ride.

Oh, I didn’t know there were 2 Ohio theaters. Wasn’t there another theater destroyed in that tornado where the Palace sits now? I think it may have been called the State?

Yes, the State Theatre was the famous building that collapsed during the storm killing 15 injuring bunches of people. Very tragic.

Built and operated in 1924 by August Ilg, with a seating capacity of 692 by 1954, per an image I just added. It was taken over by Selected Theatres in 1952 if the image is correct. When it was extensively modernized with a wide screen for CinemaScope productions.