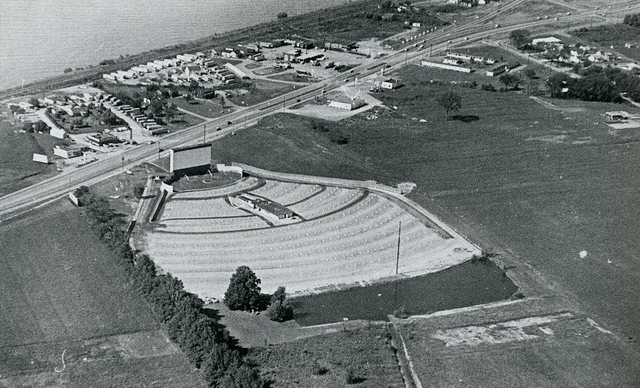 The grand opening night for the Lorain Drive-In was June 29, 1946 with the 1945 comedy “Guest Wife” starring Claudette Colbert, Don Ameche & Dick Foran. It was opened by Wilber & E.A. Patk, with Co-Operative Theatres of Ohio as the buying and booking agency. The ramp capacity was 350 cars and one speaker between two cars. Later on in-a-car speakers were installed. It featured a 75ft high screen tower and a playground. In 1955, Sam & Nate Schultz dba Selected Theatres Co. purchased the drive-in from Park. They were operating the Ohio Theatre and Lorain Theatre, both hard top theatres located at this time in Lorain, OH.

In October of 1955, Richard Kline who was the theatre manager was charged with two counts “of exhibiting an immoral motion picture”, the night previous to minors and in possession of an obscene motion picture. The movie was “Teaserama”. The movie follows the performance of a burlesque show. The three teenage boys told the police that were not asked for their ages when they bought their tickets of admission. After all the court time the charges were dropped because Kline was recharged under a new law that took effect after he was arrested. His attorney argued that charges should be dropped for something that had happened before there was a law against it, which led to the charges being dropped.

On November 26, 1957, the concession stand caught fire due to an improperly installed electrical outlet for a pizza oven. The concession stand was a total loss. On April 12, 1958, the Lorain opened a new drive-in season with an all new cafeteria style concession stand, restrooms and projection booth. Total cost was $25,000 for the entire project. On December 21, 1962, a space heater caused a fire in the concession stand again. On March 23, 1966, extremely high winds blew over the wooden screen tower and damaged it to the point it was totally demolished and a new steel screen tower was erected in its place.

On November 8, 1980, Lorain police confiscated a print of the movie “Erika’s Hot Summer”. Jay Simonik who was the manager at that time was cited with possession and display of an obscene film. Sergeant Gerald Maholic and Patrolman Raymond Stanziano viewed the film and confiscated it. The obscene movie charge was dropped because a new law states that the judge must give the theatre owner notice he want to view the film. When this did not happen, so the charges were dropped and the film was returned. The Lorain Drive-In reopened for the 1977 drive-in season and on July 25, 1977 a second screen tower was added. It was now advertised as the Lorain Twin Drive-In.

The drive-in finally closed on September 14, 1986. The last movies were “Karate Kid Part I” and “Karate Kid Part II”, “The Craving”, “Burial Ground” and “Gaudian of Hell”. In 1987 Jay Schultz and Earl Stein dba Seaway Drive-In Inc. sold the property to developer Ronald Gold. In 2002 it was sold to Lee H. Tarney and Carroll K. Tarney dba Hold it Self Storage. The property was cleared of the screen towers and the concession stand was remodelled into an office and apartment for Hold it Self Storage.

Approx. address for this drive-in was 5201 West Erie Avenue. Now Hold It Self Storage.

It was managed by the manager of the downtown Lorain theater, Mr. Dick Klein in 1957. There was a fish pond at the back. The screen was a concrete block tower, I helped my dad re-paint it. I always got in for free. I would walk there from the trailer park at next to Beaver Park. Friday’s were “Buck Nite”, One dollar per car load. One of the features shown there was The ten Commandments. We moved away to Olmsted Falls in 1959.

We used to go here on occasion when it was a two screen drive in. My mom used to sneak in a bag of popcorn and have my aging sister in pigtails while slumping in the back seat to get her in for children’s price. The final movies I remember seeing here were pretty awful; Friday the 13th Part V and Porky’s Revenge. I still enjoy the occasional drive-in setting, if anything but for the nostalgia of it.

Here is the movie that got them into troubleTeaserama (1955)