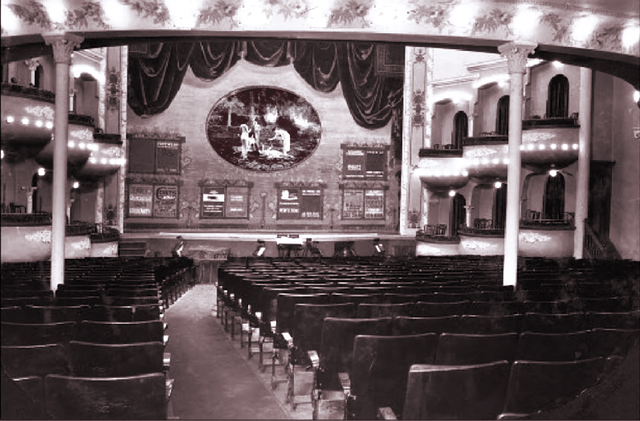 The F.B. Wagner Opera House’s origins date back to 1890 and launching in 1893 in downtown Lorain. The second story opera house hosted live music and plays seating 750.

In September of 1907, the new Majestic Theatre opened at the location likely keeping a wall and/or some elements of the original opera house to create the Majestic Theatre on the ground floor with balcony to extend seating to 1,350. “Squaw Man” opened the theatre. With Keith as new operators in 1913, the venue was changed to the Lorain Opera House. Films such as D.W. Griffith’s “Birth of a Nation” and “Intolerance” did well for the venue. A 1918 update led to the venue’s name being marketed as the New Lorain Opera House.

With its new enlarged projection booth with Simplex projection, better accessibility and manager John Gallagher coming in from Cleveland’s Miles Theatre, the State Theatre looked to be well-positioned. Unfortunately, the next year was sheer devastation as on June 28, 1924 at 5pm, a tornado came from nearby Lake Erie and took out wide swaths of Lorain central business district and nearby residential districts. The Panthenon Theatre was damaged badly and things turned deadly at the State Theatre.

At an interlude between shows with two-thirds of the audience reportedly departing minutes earlier, the tornado struck and the State Theatre held strong by all reports. But the seven-story Wickens Furniture was no match for the storm, falling on top of the the theatre allowing many patrons in the State Theatre to run to the street. Unfortunately, the weight of the Wickens Building roof and some of its top floors concaved the State Theatre, and the balcony of the theatre crashed to the main floor leading to loss of life.

A steam shovel was brought in and the theatre’s remains were ultimately razed on June 30, 1924. The location became home to what is now called the Broadway Building built in 1925 and formerly home to the Spitzer Plaza Hotel. At 383 Broadway is a historical marker commemorating those lost at the State Theatre.

The Cleveland Architects Database lists a 1907 project by architect James M. Bostick for a “[t]heatre, store and apartments for the Opera House Company” at Lorain, Ohio.