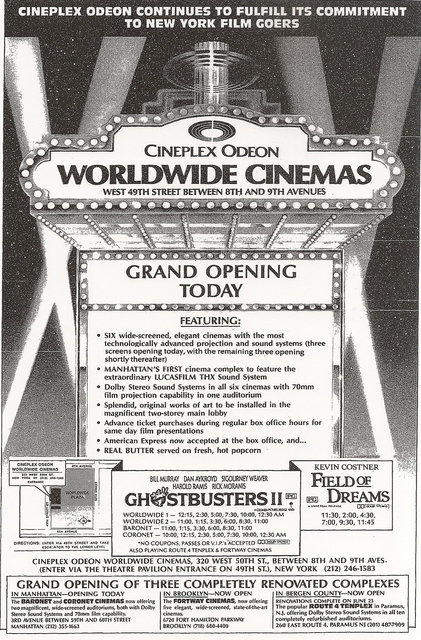 The complex was built and run by the Cineplex Odeon organization from its opening on June 16, 1989, when it made a big splash in entering the Manhattan theatre market. However, the theatre never took off due to the fact that the surrounding neighborhood didn’t gentrify quickly and its somewhat off-the-beaten track location.

As some point, around 1995/1996 the Worldwide Cinemas changed its booking policy from first run fare to second run fare at a deeply discounted price that was $2 or $3. The cinemas did quite well under the new format, but with the AMC 25-screen ‘plex and the Loew’s E-Walk 'plex opening on 42nd Street, the Loews Cineplex chain saw the handwriting on the wall and closed the theatre February 22, 2001.

When this complex was first opened by Cineplex Odeon in 1989 one of the auditoriums had LucasFilm THX Certification, anybody here remember or know which auditorium number it was?

Theatre fan, it would been the largest screen, whichever that was. It failed certification due to HVAC noise, but later Lucasfilm advertised uncertified theatres in the trade papers. Cineplex Odeon noticed and started to do the same. It was all just one big con job on movie-goers.

Thanks, Al & Howard! The Cineplex Odeon Chelsea also had I believe #6 & #7 as THX Auditoriums. Now when you check the THX Website there is not one single theatre in all of Manhattan with it at all. The last two I remember seeing were Lincoln Square & Union Square.

I believe these stages are now managed (owned?) by The Shubert Organization.

The Cineplex Odeon Worldwide Cinema open June 16, 1989 with Ghostbuster II. The theatre could not compete with the Times Square theatres and the Chelsea Cinemas. Sometime around 1994, they went to a second run theatre with reduced prices.

The grand opening ad is in the photos section.

HowardBHass Theatre 3 when it was a movie theatre was about 366 seats. My source was from Variety and I saw movies in most of the 6 theatres, mostly as a discount theatre. Went there once when it was full price.

I kept theatre capacity information for New York City, but my records prior 2003 got lost. At least Newspapers.com and Proquest I could look back.

I wish I took pictures inside this location, but didn’t start taking movie theatres on a regular since 2003

Please update, it was Loews Cineplex that closed the theatre.