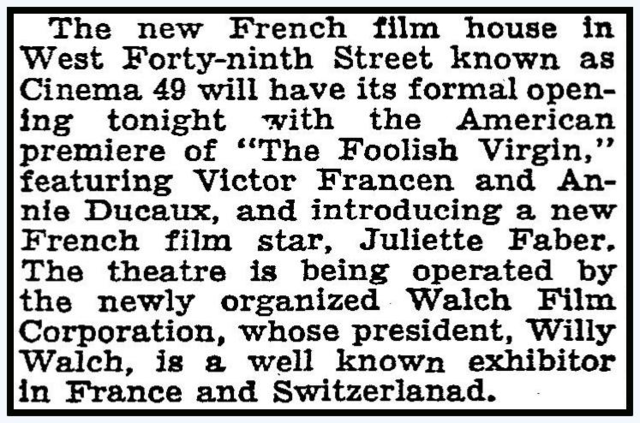 Opened in 1921 as the 49th Street Theatre, this house was one of four in the neighborhood built for the Shubert Brothers Theatre Company during the period, all of them designed by architect Herbert J. Krapp. The facade featured a Beaux-Arts Classical Revival design very similar to that of Krapp’s 1925 Biltmore Theatre (now the Samuel J. Friedman Theatre) on 47th Street, but executed in terra cotta rather than face brick.

The Shuberts lost control of the house during the depression, and it sat dark for several years, except for being briefly opened for three productions sponsored by the Federal Theatre Project.

The New York City Guide published in 1939 as part of the American Guide Series of the Federal Writers Project listed Cinema 49 as one of three foreign language houses in Manhattan specializing in French films. The Cinema 49 closed in 1940, and was demolished late that year.

The Internet Broadway Database has a page for Cinema 49 with a single photo.

Wow. This theater didn’t even make it 20 years. That image on IDBD seems to have been taken during the latter stages of the 49th Street Theatre’s construction.

Funny, how if you swing the street view for a closer head-on look, the image seems to jump back in time a couple of years to when the Pearl Hotel was stil under construction! Seems to me that the hotel’s broad and flat entrance canopy is not unlike the one that was situated on the 49th Street Theatre. Most likely an architectural tip of the cap to the theatre district itself, rather than a nod to the particular playhouse that once occupied this lot some 72 years ago.