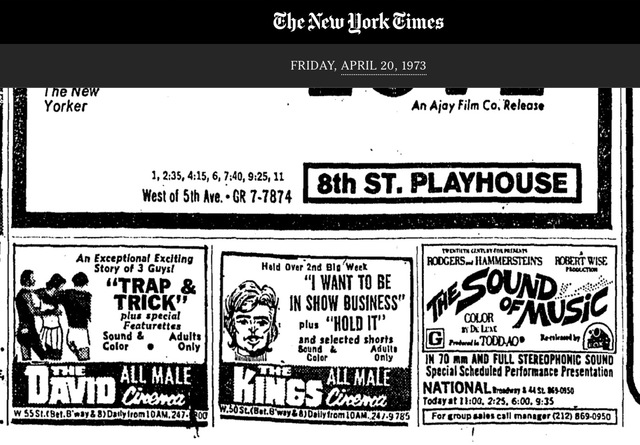 The Kings Cinema has been demolished and replaced by a parking garage to serve the adjacent newly built tower block at 250 W.50th Street.

I hate to see any theatre or club being held responsible for sexual behaviour, much less accused of leading to the spread of AIDS. People do things, not buildings, and the people having sex in these places had no idea of the risks involved anyway. I would imagine the late hour 42nd street grind houses such as the New Amsterdam would be more honest targets for tolerating this behaviour than later mini-porn houses such as this one. Weren’t Nicklodeons similarly stimatized for all kinds of anti-social behaviour?

Having said that, in my opinion, the role places like the Kings serve on this board is that of a historical link that shows what people were up to at a certain time and place.

When articles written by 20 year old journalists quote that in mid-1982 New Yorkers were watching E.T. they might also honestly mention that several thousand New Yorkers were also engaging in sex with strangers at over two dozen Times Square movie theatres found on this site but otherwise buried by history.

As someone mentioned before, possibly KenRoe, who would bother listing these very special “treasures” if we don’t?

Ad for the 50th Street Cinema during its Avant Garde film stage.

Come on Al, you really beleive these people had no idea of the risks involved in having that kind of sex in these kind of places? This is the 21st-century! And let’s not excuse the theatre or club for this behavior. They know exactly what kind of joints they’re opetating! It’s time get out and look around.

Most Americans had never heard of AIDS until Rock Hudson died in 1985. It was the first time Ronald Reagan even said the word in public. The King closed in 1986. Straight sex clubs were still in full operation years later since it was still considered the “gay disease”.

I want there one time. I remember as being a rather small theater.

If I recall correctly The King had moved to West 43rd street and was rather small. Or was that another theater?