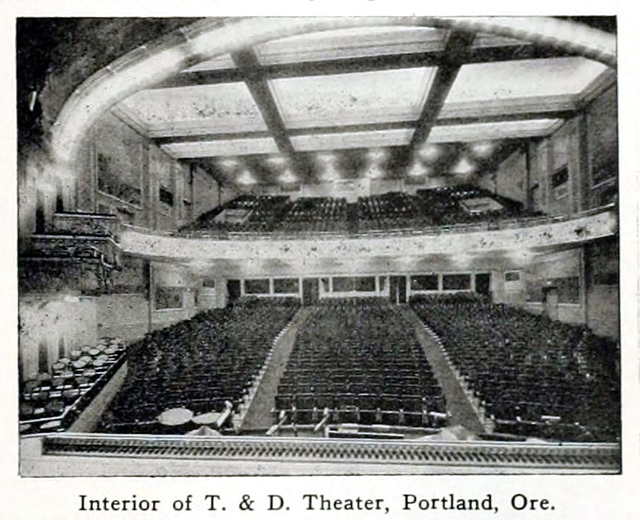 The Orpheum Theatre opened on 3rd March 1913. In 1915 it was renamed the Empress Theatre. In 1916 it was renamed T & D Theatre. it became the Hippodrome Theatre from c.1917-1925. In c.1926 architect B. Marcus Priteca re-modelled the theatre for Pantages and it became the Pantages Theatre from 1927-1929. In the internal re-modelling Priteca created a ‘star’ ceiling over the auditorium.

Known as the Orpheum Theatre from 1929 until it closed in the mid-1970’s. Its last operators were Mann Theatres who gave a seating capacity of 1,360. It was demolished for a clothing store to be built on the site.

There’s a 1972 photo of the Orpheum at View link

The entire block of the former theaters location is now taken up by the downtown Nordstrom. If it were still there it would face the today’s Pioneer Square.

Luxury Theaters (if there was ever a misnomer…) was the last operator of the Orpheum, which, like all the other wonderful Portland theaters it acquired, let it fall apart.

Ancient history: In the summer of 1957, when the Orpheum was still a Fox Evergreen theater, an electrical short set fire to the screen, elaborate drapings (a massive waterfall curtain covering a beautiful cherry-red crushed-velvet traverse curtain) and adjacent curtains that had covered original ornamentation.

There were only a couple of people in the theater (a matinee) so nobody was hurt. The feature that day was the critically maligned “The Story of Mankind.” The Oregonian newspaper’s film critic commented that, yes, the movie was awful, but it wasn’t worth trying to burn down the theater.

Does anyone have interior photos of the house or balcony? I had the privilege of seeing movies here as a kid and remember the steep and seemingly sweeping balcony. It always seemed, as a child, it could suck you to the end and over the railing. I realize this was not the case, but you know your memories. It was a shame to lose this and the other theaters Downtown Portland. I remember them fondly as my home away from home.

According to a survey of historic buildings in downtown Portland, the original architect of the Empress Theatre in 1913 was Lee DeCamp. The aptly-named DeCamp was rather peripatetic, and at various times had offices in Denver, Portland, Chicago, Grand Rapids, and Cincinnati, as well as at least one branch office in Canada.

DeCamp designed at least two other theaters called the Empress, in Kansas City, Missouri, and Sacramento, California. DeCamp was for some time the supervising architect for the Sullivan & Considine vaudeville circuit, which favored the name Empress for its theaters. This might have accounted for his propensity to move from city to city. Many other Sullivan & Considine houses were undoubtedly designed or remodeled by DeCamp but are not yet attributed to him.

This theatre was erected in 1913 by the Blodgett Company Ltd on the site of the city’s former library on Broadway, 100 feet off Washington Street. The Condon-Noonan Company had intended to open it as an independent theatre but before it was completed Sullivan and Considine took a lease on the premises and finished the construction. When completed it was the home of the Orpheum shows. Tom Conlan was the theatres first active manager and he succesfully initiated the house to pictures during the summer of 1915. Sullivan & Considine afterwards moved the Orpheum shows to a theatre further up Broadway, transferring S & C vaudeville to the former Orpheum and changing the name to the Empress.

As the Empress it was operated until the Sullivan & Considine circuit left the field in May of 1916, when Turner & Dahnken leased the house from Ackerman & Harris of San Francisco, who had fallen heir to the S & C business. The theatre was reopened on May 14th 1916 as the T & D Theatre after a refurb, when the projection booth was enlarged and modern photoplay equipment installed, as well as the renovation of the interior and addition of a Hope-Jones Wurlitzer Unit Orchestra organ, (the pipes of which formed the stage setting) & electrical display, at a cost of $50,000.

The building itself was 100ft x 200ft with seating for 2,300 – of which 1,400 were on the lower level. There were 15 exits on to 3 streets. The walls were decorated with autumn scenes, with rich curtain hangings. Projection was furnished by 2 x Power’s machines. Manager of the T & D at this time was M. O. Leonhart, who had come from the T & D theater in Berkeley, California.
Source: archive.org/stream/movingpicturewor30newy#page/397/mode/1up

Yes Portland had quite the theatre street much like Seattle. They both also had a Music Box, Blue Mouse, Orpheum and Paramount. Only their Paramount continues to this day. It had been renamed. Seattle Paramount continues with the same name and an extensive updating with a newer huge stage and stage house. State of the art. Same elegant plaster work.

In my salad days, I was Assistant Manager of the Orpheum Theatre, a title more impressive than the job. I took tickets; cleaned up blemishes on the premises, like gum on the carpet (I can can still smell the cleaning solution); took the box office count at the end of each shift. etc. Ah, the box office count. Why didn’t the till match the ticket count? Hmmm…

Rex Hopkins was the Portland Manager for whomever owned the Orpheum in the late 1960’s. A gaunt, dignified presence presiding over the sunset years of movie palaces. Scattered viewers during the week where once there had been crowds, not much better on weekends. Movie soundtracks tending to echo in sparsely attended matinees.

One of my tasks was to climb up to the projection booth to wake up the dozy projectionist, older than Rex Hopkins, who would sometimes miss the reel change, leaving a bright, blank screen.

The projectionist, Fredsie, had been in the movie exhibition biz since the silents. He had come up with a design to extend the life of the carbon rods in projectors, (yes, still carbon arc in the late 60s), but no one had been interested. When I wasn’t occupied with details of running the theatre, Fredsie would regale me with stories of the Good Old Days . An interesting eyewitness to things I had only read about.

One of the interesting things about being around the Orpheum was going backstage to the old dressing rooms from the vaudeville days. Imagining the performers putting on makeup, joking with each other, or maybe not joking (backstage drama). Again, adding some immediacy to things of the past.

One day, there was work being done to upgrade the screen and the sound system. Who would be working on that but my drama teacher from high school. “What are you doing here,” he asked. (I had graduated just the year before.) I was too polite to ask him the same question. Obviously he was picking up some bucks. Must have been a member of IATSE, so the bucks were pretty good. I lost track of him after that.

Time and the river, etc.

Nacemi, what a great remembrance. I used to go to the Orpheum often as a child. It was a great place. I remember Rex Hopkins, too. I don’t remember a missed reel change, so perhaps Fredsie took some No-Doz.