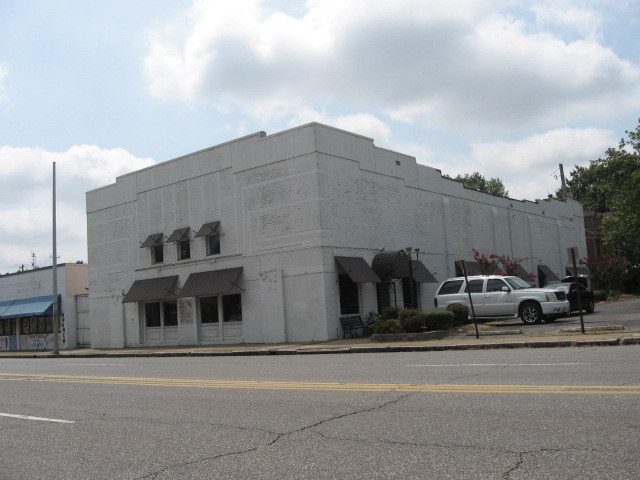 The Idlewild Theatre was opened in 1939 by Chalmers and Edward Cullins and partner Nate Evans. Edward ran this theatre; it was one of the larger neighbourhood theatres and had a balcony.

In the 1960’s it was remodeled into a live theatre named Front Street Theatre (after the street where the company was first located). It went through an adult movie period as the Capri Art Theatre closing in 1975, was a music venue under several names(more names than any other building in Memphis) including Ritz Theatre, was a gay bar then divided up into retail spaces and then cleared out again.

It was last in use as a special events venue named Madison Square with only the lounges and balcony structure remaining from its early days. It was demolished in March 2018.

Here are a couple of photos from January 2006 of the Idlewild.

The performing company got it’s start as a semi-pro company and performed in the basement of the “King Cotton Hotel” on Front Street in Memphis, when it went outgrew the confines there, a new location was needed, first the Memphian was considered, would have been a wonderful choice, but the deal fell thru, and since a midtown location was prefered, the deal with the Idlewild was made, and they brought their name with them.

As performing theater it could seat 401.

I spent many happy and sometime hard hours there when I was in High School, I learned so very much, maybe sometime I will share some of my times.

For now just wanted to explain the name and give a few facts.

This theater was demolished on March 20th, 2018, for redevelopment. Only the restrooms from the theater’s heyday still existed, the rest had been remodeled many times. This building sported more names than any other theatre building in Shelby County.

I looked up “Love Mates,” which is advertised as the opening attraction at the Capri Art Theatre. It actually appears to be a respectable romantic comedy from Sweden, although you wouldn’t know it from the theatre’s ad.