Playhouse on the Square Home Page 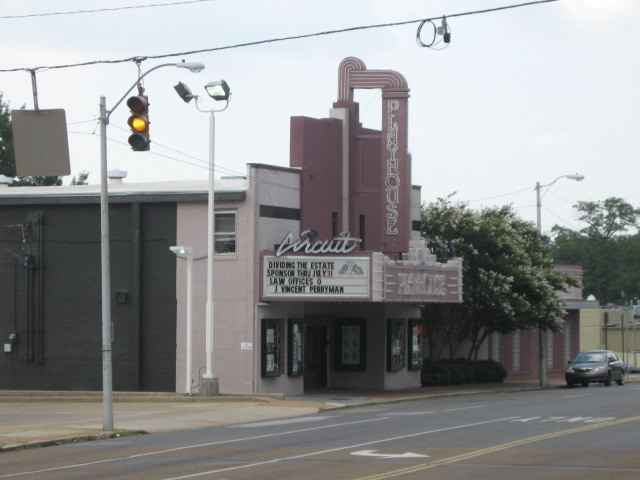 Originally at this address in 1928 the second American Theatre opened. The earliest known photograph of that building is from a 1930 magazine article and it was named Malco Theatre on December 20, 1929. Remodeled as the Memphian Theatre in Art Moderne style in 1935, this former movie house to this day still remains elegant and stylish, with its bold blade marquee, which is brilliantly illuminated in neon at night. The Memphian Theatre has had at least one serious fire and has been remodeled several times, including the front. Its trademark feature is the neon behind glass blocks between the front showcases.

It was used in the 1960’s by Elvis Presley regularly for private parties he held there. One seat used by Elvis is preserved from that era. It was closed by Malco in 1978. It was reopened on August 29, 1980 by Movies Inc.

Though its days as a movie theater ended more than two decades ago, the Memphian Theatre remains in use today, as one of the city’s best-known smaller live theaters.

Playhouse on the Square, bought and renovated it for professional live theatre in 1986. In 1992 and 1997, the Playhouse expanded into empty storefronts adjoining the old movie theatre and expanded the offices and technical areas. It still retains a few balcony seats.

When Playhouse on the Square moved into its brand new facility across the street in 2010, Circuit Playhouse, the community owned theatre owned by the same company, moved into the old Memphian Theatre. During Elvis Week in the summers, the theater offers modest & fun tours of the building. The neon letters spelling ‘Memphian’ became a sculpture displayed in the bar/lounge area, which has also had use as a cabaret space.

If you want to see a really nice photo of the Memphian Theatre before it was Playhouse On the Square, look for an album by Joe Walsh called “Got Any Gum?”. It dates from 1987 but the front cover is a very nice shot of the theatre when it was still the Memphian.
(Just Google the info and you should easily find a pic.)

Very nice I will have to drive over and check it out.

As an employee of the company for many years, I wanted to let Elvis fans know that during Elvis week in the summers, we offer modest and fun tours of the building, formerly the Memphian Theatre (a favorite hang-out of Elvis'). If you or a group is interested, contact Courtney Oliver at It’s a fabulous building and wonderful landmark for Midtown Memphis!

New photo uploaded of the Memphian as Circuit Playhouse.

So nice to know this theatre has been preserved as it will always have a personal connection to Elvis.

The premiere of the film “This Is Elvis” was held at the Memphian Theatre on Friday April 3, 1981.