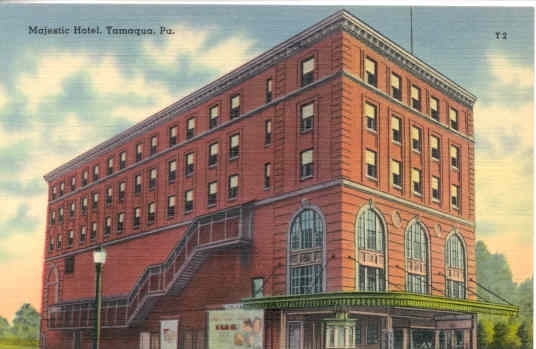 This theater was located on Broad Street in Tamaqua. It opened in 1924 and operated as a movie theater until the late-1960’s. A hotel was located on its upper floors.

The building still stands but was totally remodeled into a senior citizen apartment building.

Attached is an early postcard image of the Majestic.

The former hotel which included the theatre at 201 East Broad Street (corner of Pine) is now known as Majestic House.

This item from the January 5, 1924, issue of Exhibitors Herald is about a combination theater-hotel project to be built in Tamaqua:

“New Theatre and Hotel Under Way

“A theatre and hotel combined which will cost $550,000 is under construction at Tamaqua, Pa., for G. J. Higgins & Sons. The theatre will have a seating capacity of 1,400, while the hotel will have 120 rooms with baths.

“W. H. Lee, 32 S. 17th Street. Philadelphia, is the architect for this project.”This web page cites an item published by a Tamaqua newspaper in 1923 saying that George Higgins was planning to build a hotel and theater in Tamaqua. Both items must pertain to the Majestic. I’ve found references to the Higgins Amusement Company of Shamokin, Pennsylvania, operating houses called the Majestic in Pottsville and Gettysburg, so it was apparently the company’s favored name.

The Majestic House apartment building is at 201 E. Broad Street. Although extensively altered, some of the building’s details on display in vintage photos are still recognizable.