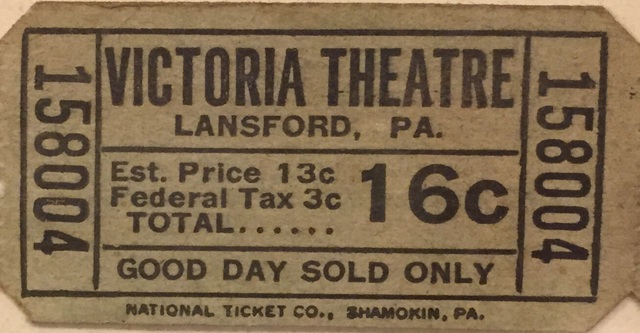 The Victoria was part of the Humphries Enterprises chain in the late Sixties. Owner, booker and purchasing head was James Humphries, headquartered in Lansford.

An article in the August 8, 2001, issue of Allentown daily The Morning Call said that it would be at least a month before the remains of the former Victoria Theatre in Lansford would be removed. The theater building, long used for the storage of automobile tires, had partly collapsed on July 13 that year.

The article said that the theater building had been a “century old” at the time of the collapse. That means it must have been the old Lansford Opera House, the only large theater in the town during the early years of the 20th century. The opera house was in operation by 1908, as it was listed in the 1908-1909 Cahn guide, and was also mentioned in issues of The Billboard that year. The Opera House was still listed in the 1922 Cahn guide. The earliest reference to the name Victoria Theatre I’ve found is from 1932, and I’ve not yet found the house mentioned under either name between those years.

CinemaTour has about eighty photos of the Victoria from the John Lewis collection, showing the house both before and after the collapse. Thumbnails are at this link.