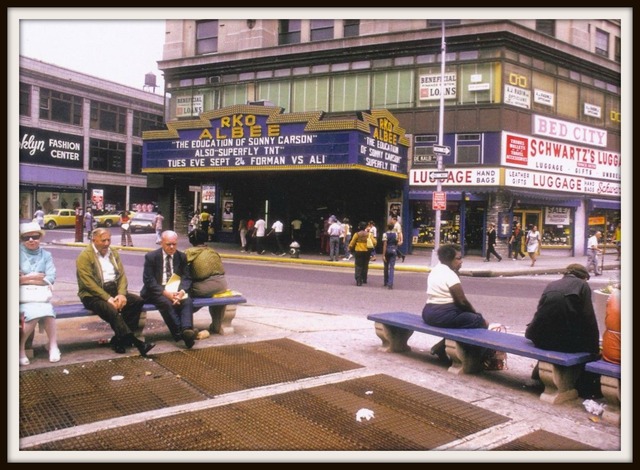 The E.F. Albee Theatre, on Dekalb Avenue, which opened on January 19, 1925, was named after Edward F. Albee (1857-1930). It was originally planned to be named the New Orpheum Theatre. The E.F. Albee Theatre opened on January 19, 1925 with a vaudeville show featuring Bill Robinson and Smith & Dale (part of the Avon Comedy Four). It had crystal chandeliers in the lobby and paintings from Albee’s private collection. It also contained a 40 x 70 foot Czech Maffersdorf carpet billed as the world’s largest rug. It was equipped with a Wurlitzer OP 870-260 special organ with 2 manuals and 16 ranks. Soon after opening it went over to movies.

The RKO Albee Theatre was closed on September 21, 1978 and was demolished in November 1978 to make way for the Albee Square Mall (which itself was demolished in the Summer of 2008). The up-market City Point retail and residential building was built on part of the site, and this contains the Alamo Drafthouse Downtown Brooklyn movie theatre which opened in October 2016. (It has its own page on Cinema Treasures).

Hey BigJoe'59 ….From Sept of 1973 to May of 75, all the downtowm theatres weroperating except the Fox, torn down within those months, the Paramount, Strand were closed in other uses. The Orpheum and Momart weretorn down in the early 1950’s. Loew’s and the RKO Albee, Duffield and Majestic were still open. You might be mistaking the Albemarle Theatre with the Albee. The Albemarle, Astor, Kings, Rialto (all Flatbush Ave.) and the Beverly, Kenmore and Granada (all Church Avenue) were all operating at this time. However the Kings and Rialto both closed on August 30 1977 along with the Astor. The Granada 1982, Albemarle in 1983 with the Beverly soon after. The RKO Kenmore was the holdout until 1999. Three of the Flatbush Avenue theatres all in a row are still intact… 1 for live shows and 2 as houses of worship. In order of condition it’s the Albemarle, Kings and the Rialto (the oldest at 103 years old looks like the day it opened (interior). The Albemarle is immaculately maintained inside and out (including power washing the bricks on the facade and side (every year!), the sidewalks and interior. No theatre gets that much tender loving care. I will not discuss the Kings for obvious reasons.

to Orlando thanks for the info. also to Comfortably Cool when I said all of NYC I meant all five boroughs. in fact if they were still in operation both the Bunny and The Colosseum would have take the title from the Alpine. both theaters in Upper Manhattan closed rather recently.

how is the gutted movie palace in Flushing listed on this page? I tried just Flushing, then RKO Flushing. then i tried Keith’s Flushing. but zippo.

RKO Keith’s Theatre in Flushing page is below.

to David Z. and Rob B. thanks of the info. just out of curiosity would you happen to know why Queens is the only borough out of 5 in NYC that doesn’t get a borough listing and you have to put the specific neighborhood in Queens you’re looking for.

The various towns/districts of Queens were listed in editions of Film Daily Yearbooks as being in Long Island. When Cinema Treasures was first set up for some reason each town/district were listed as separate entities.

to Ken Roe thanks for the info. its just bizarre that Bronx, Brooklyn, Staten island and Manhattan(as New York, New York) gets entire borough listing where as Queens doesn’t.

Unlike the other boroughs of New York City where references are to the such and such section, Queens has maintained community identities in every day references and specifically designated Post Office Identities. If it’s good enough for the US Postal Service it should be good enough for Cinema Treasures. So let it be.

Also, isn’t it easier to find something with a community name than the borough name? Did you ever see how many entries there are for Brooklyn?

this was one of the first theatres in the us to show closed circuit fights long before fathom events made it possible.