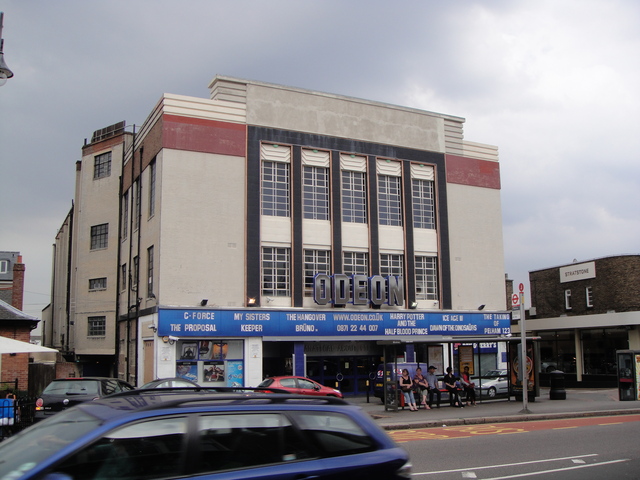 It opened on 5th November 1934 with Claudette Colbert starring in “Cleopatra” and the opening was presided over by Winston Churchill who at that time was the local Member of Parliament.

The architect was S.B. Pritlove who designed a pleasing Art Deco style suburban cinema which seated 1,724 in stalls and circle levels. It was equipped with a Compton theatre organ and a retaurant/ballroom.

Here is a 2002 photograph and more details on the Odeon (South) Woodford:
View link

The marquee of the ABC Woodford is featured briefly in Peter Greenaway’s 1976 experimental short Dear Phone.

I think someone has made a mistake with the date when this was changed into a triple cinema. The text says it happened in 1937 but I know for a fact that I used to go to saturday morning pictures during the late 60’s early 70’s and it was still the Majestic back then with a single screen and used to cost 5 new pence. It was definitely still Single screen Majestic when the movie S.W.A.L.K was released in 1971 because it was at the Majestic that I went and saw it

Thorpx: Many thanks for pointing out the date typo for tripling in the introduction. It has now been corrected.