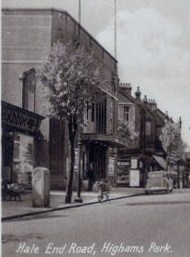 Located close to Highams Park Railway Station on the Chingford line of London Overground in North-East London. The Highams Park Electric Theatre opened on 1st April 1911. It was designed by architect W.A. Lewis and had a seating capacity of 550. It was re-named Regal Cinema in 1928 and improvements were made to the building in 1933.

In 1935, it was partly rebuilt to the plans of architectural firm Howes & Jackman. It received a new modern Art Deco style facade and entrance foyer. A cafe was added in the circle foyer and a Rutt 3Manual/6Ranks organ was installed in the modernised and enlarged auditorium, which now seated 615. The Regal Cinema re-opened on 23rd September 1935 with Irene Dunne in "Sweet Adeline" and W.C. Fields in "It’s A Gift".

Always independently operated, the Regal Cinema was closed on 11th September 1963 with Frank Sinatra in "Some Came Running" and John Bentley in "Escape in the Sun". It was converted into an independent bingo club, but this was not too successful, and films returned on several nights a week, beginning on 23rd February 1964 with Norman Wisdom in "A Stitch In Time". By April 1964, bingo had been dropped and full time cinema use resumed. The Regal Cinema finally closed on 27th April 1971 with Paul Newman in "Exodus".

It became a bingo club again, this time using only the circle seating area. The stalls area was used as a snooker hall. Later, the bingo operation ceased and Regals London Snooker Club continued for many years in the auditorium, while a bar operated from the former foyer. The Rutt organ is now housed in the St Albans Organ Theatre, St Albans, Hertfordshire, where it is played on a regular basis.

On March 20, 2018 Waltham Forest Council approved planning permission to restore the the Regal Cinema and convert it into a twin screen cinema with a cafe/bar.

A close-up of the name sign on the facade of the Regal Cinema:
View link

The 3 manual 6 rank Rutt Cinema Organ (one of three built by Rutt) is now in the St. Albans Organ Museum.

The Regal is featured in the 1970 film Deep End, so not too long before it closed.