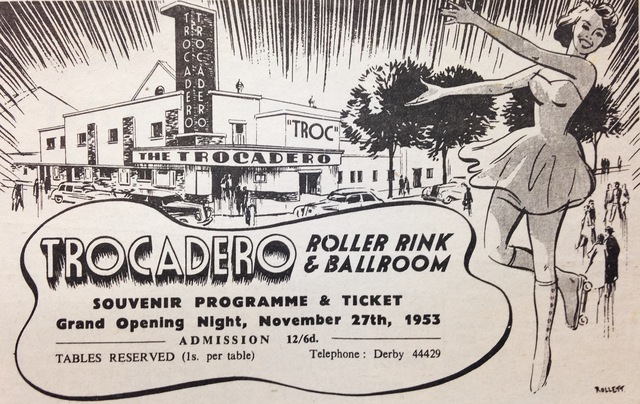 The Alexandra Electric Theatre opened on 6th October 1913 with the three reel Pathe colour drama “Delivered by Death” on the screen plus variety acts The Toladonas, Will Rosco & Jack and Jenny on the stage. The cinema, which seated 1,269, was a conversion of the Alexandra Rink that was built in 1909 for roller skating. It was located just off the City centre on Normanton Road at the corner of Hartington Street.

The exterior was quite elaborate, but inside the auditorium little change had been made from its previous use, apart from raking the floor, the roof support beams were not hidden from view by a plaster ceiling. All seating was via tip-up seats and they were located on one level.

In 1939 the cinema was closed for extensive alterations. Noted cinema architects Percy L. Browne, Son & Harding were responsible for designing a new façade which was dominated by a rectangular tower feature and a semi-circular canopy that protected the entrance. Inside the auditorium was given an Art Deco style treatment with horizontal ribbed lines on the walls and rectangular trough lighting in the ceiling. Seating had been reduced to 1,100 for more comfort.

The Alexandra Theatre was a 2nd-run or even 3rd-run cinema and played mainly action movies. It was an early casualty and closed on 31st May 1953 with Leslie Howard in “Pimpernel Smith”. It was never equipped to screen CinemaScope wide-screen films.

The floor was levelled and a wooden sprung dance floor was installed and it became the Trocadero Roller Rink & Ballroom which opened on 27th November 1953, operated by local businessman Sammy Ramsden. This was a very successful venture and continued into the early-1960’s. Eventually the game of bingo was brought in, initially on quiet nights, and then it went over to becoming a full time bingo club, first operated by Star Cinemas and then by EMI. The building was destroyed by a fire that broke out on the night of 18th October 1982. The bingo operation was transferred a year later into the closed down Odeon (former Gaumont Palace) London Road which was re-named New Trocadero Entertainment Centre.

The remains of the burnt-out former Alexandra Theatre were eventually removed and a block of flats named Trocadero Court was built on the site.

A photograph that I took in 1961 of the former Alexandra Theatre in use as the Trocadero Dance Hall.
View link