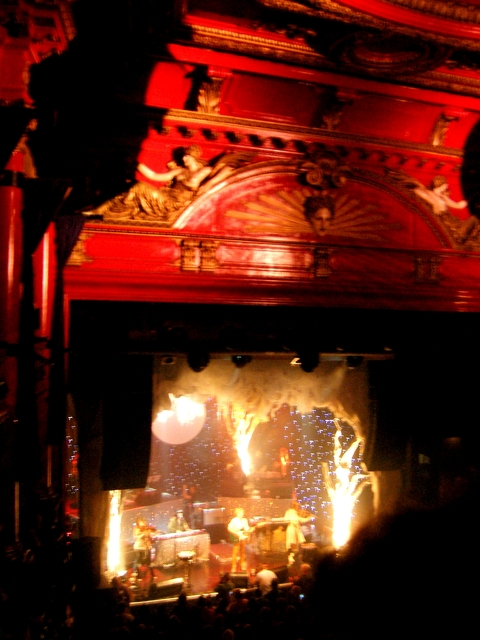 Located at the southern end of Camden High Street, across from Mornington Crescent Underground Station, in the northwest London inner-city district of Camden Town. Opened on 26th December 1900 as the Camden Theatre. It was opened by famed actress Ellen Terry and initially it was a stage theatre for plays.

It was designed by the prolific theatre architect W.G.R. Sprague and was typical of the exuberant theatres that were being built at the turn of the 20th Century. The exterior’s symmetrical stone façade is designed in a Classical style with four stone pillars that are spaced between windows. The building is dominated by a large copper dome, that originally had an open lantern that was topped by a statue. There were also eight statues of classical figures mounted on the corner pediments of the building.

Inside the auditorium the seating was arranged in stalls, dress circle and balcony with a gallery section containing wooden benches at the rear of the balcony. An additional 793 spaces were reserved as standing room spaces bringing the total capacity allowed into the building as 2,434. Decorated in a beautiful Baroque style with naked female figures holding supports for the boxes and columns, the rectangular marble proscenium is topped by more plaster reliefs of reclining naked women. The ceiling contains a shallow dome.

On 6th December 1909 it dropped the straight plays policy and converted into a variety theatre and was re-named Camden Hippodrome Theatre. By 1911 films were being presented as part of the programme and in January 1913 it went over to become a full time cinema known as the Camden Hippodrome Picture Theatre. Operated by Biocolour Picture Theatres Ltd. from January 1928, they were taken over by the Gaumont British Cinema circuit in July 1930 and it was operated by their subsidiary United Picture Theatres Ltd.

It closed down as a cinema in April 1940 and stayed empty throughout the remainder of the war. In 1945 it was taken over by the BBC and converted into a radio studio, becoming home to the BBC Theatre Orchestra and in the 1950’s the popular radio comedy ‘The Goon Show’ with Harry Secombe, Eric Sykes and Peter Sellers was broadcast from here.

The BBC moved out the building in around 1960 and it lay empty for several years and even faced demolition. In the 1970’s it was converted into a nightclub and has had several changes of ownership and name; Nero’s, a dance club with live music, the Music Machine, a mainly live music venue that had a movie filmed within the building called “The Music Machine” (1979) starring Gerry Sundquist. From 1982 until early-2004 it became famous as a live concert venue and nightclub called the Camden Palace. Madonna made her debut UK show here in 1983. It now has new owners who are continuing the same policy and since 2005 has been known as KOKO. It is licenced to hold 1,410 when there is a live show on stage, or 1,500 for night club use.

KOKO was closed on 27th September 2018 due to the building being deemed unsafe during refurbishment which was due last until April 2020. Structural remedial work closed the building until mid-October 2018. A 32 room hotel is being built next door with access from some of the rooms to private boxes on the 2nd circle of the theatre. The dome on top of the building is being converted into a bar and function room. The stage fly tower will be converted into a two-storey suite for the hotel and a recording studio for visiting artistes. The auditorium decorative features will be restored. More information, history (some of it incorrect) and pictures on the KOKO website on the right.

The theatre was given Grade II Listed status in 1991.

here are some recent shots of this fabulous building (taken at an MTV Scissor Sisters concert), the interior is still very like an edwardian theatre, a riot of super camp plasterwork, the lobby remains very tasteful but the auditorium is bright “tarts lipstick” red, with gold and glitter applied everywhere

I just saw a Retro Minute feature from www.getback.com that said on 11/17/68, The Who, Small Faces, Mindbenders and one other band played live at the London Hippodrome.
I searched the CT list for London Hippodrome, and this was the only one still standing at that time.

David Zornig; The London Hippodrome Theatre is located on the corner of Cranbourne Street and Charing Cross Road, close to Leicester Square in London’s West End. In the 1960’s it was operating as the Talk of the Town, offering middle of the road type artistes. So I doubt it was that particular Hippodrome Theatre.

The Camden Hippodrome Theatre could have been the venue you mention for the bands playing above, as it had been vacated by the BBC in the early 1960’s and could have been available for concerts before it became a nightclub.

There was also the Golders Green Hippodrome Theatre, which was used as a concert hall by the BBC, so that is another possibility, but they tended to record light music & classical concerts in that venue.

It was still in use as a BBC radio theatre in the late 1960s I used to go there regularly to watch various comedy programmes be recorded. I t was just known as the Camden Theatre.

The Last Goon Show of all was filmed here.

There appears to be a major fire at this building.

News about the fire.