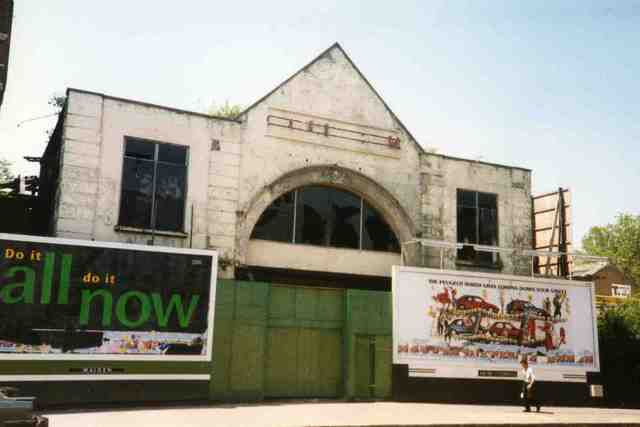 Located in the north London inner city district of Stoke Newington. Opened in January 1913 as the Electric Coliseum Cinema, seating was provided on stalls level only. It was always an independently operated cinema throughout its life and for many years was operated by Kingsland Pictures Ltd. who also ran the Plaza Cinema, Dalston.

The Coliseum Cinema closed on 5th February 1972 with the double bill programme;Michael Caine in “Too Late the Hero” and Lee Marvin in “Hell in the Pacific”. The building was closed up with all equipment remaining intact awaiting a new owner who never came along. It was broken into and vandals wrecked the building. Eventually it was sold and its fittings were stripped out.

In the 1980’s, work commenced to convert the building into a car salesroom, but finances dried up and it remained in a half finished limbo for several years. The name ‘Coliseum’ still hung onto the front of the building, gradually loosing letters over years. Vandals destroyed the building by fire in December 1992 and the burnt out shell remained until it was finally demolished in 2001. The site was vacant for many years until 2012, when a block of flats with retail shops on the ground floor was built.

The remains of the Coliseum photographed in 2000, just before demolition:
View link

I have now found that this opened as the Electric Coliseum Cinema in January 1913. It had dropped the ‘Electric’ from its name by 1922.

Behind the large semicircular window at the front of the buiding was the rewind room / workshop. The projectors were BT-H SUPA Mk.Is, which after closure were visible from the street through the open side door of the projection room. Like other buildings in the area, such as the Dalston Odeon just up this road, this lovely cinema was vandalised by the scum, who now infest this part of North London.

I realize this isn’t the Coliseum, but I don’t see any other Stoke Newington theaters listed. My understanding of London geography is nonexistent. Perhaps Ken Roe knows something about this former theater, or if it’s listed on CT:
http://www.thepotteries.org/art/107.htm

Regarding the photograph in the link you posted….the text to it is partially correct. It is located in Church Street, Stoke-on-Trent, Staffordshire in an area in the Midlands of England known as the Potteries. Originally the Eagle Music Hall (1880) it became the Music Hall (1882) and by 1900 Queens Palace. It opened as the New Queens Palace (a cinema) in 1910 and closed in 1921. After this it became unused and derelict and was demolished.

In its place, in 1929, was built the building in the photograph; the New Rialto Ballroom and Cafe which opened on 31st December 1929. So sorry, not a theatre/cinema as stated.

Thanks for the info, Ken.

In the 1960’s when I worked for British Cinematograph Theatres, this hall was booked by Willie Morris although I beleive it was owned by Frank Okin. I remember Willie asking me once about spares for the Nevelector Rectifiers and I told him that we had picked up a second-hand one for Enfield Town (Florida) for Â£50.00 and Willie telling me that the Coliseum was a hall on which he did not want to spend Â£50.

Another of my childhood memories. Admission before 4 pm was a pre-decimal 9d (just under £0.04 in decimal coinage) for under 14’s after which it went up one shilling.