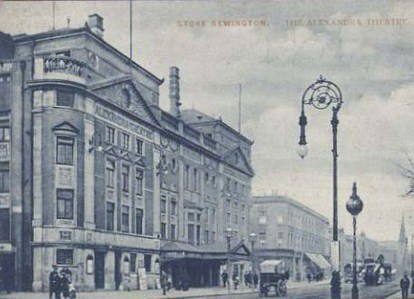 Located in the northeast London inner city district of Stoke Newington, on the west side of Stoke Newington Road. The Alexandra Theatre took up the entire block between Princess May Road and Belgrade Road. It was built as a playhouse drama theatre for Frederick William Purcell who also operated other London suburban theatres including the Marlborough Theatre, Holloway. The Alexandra Theatre opened on 27th December 1897.

Designed by noted theatre architect Frank Matcham, there were two end bays, topped with pediments, and the name ‘Alexander Theatre’ in the stonework at each end. The auditorium ran parallel to Stoke Newington Road and was in an ‘Elizabethan’ style. The internal decorations were carried out by De Jong and Company. The proscenium was 32 feet wide, the stage 47 feet deep and 65 feet wide Seating was provided for 200 in the stalls, 600 in the pit, 200 in the dress circle, 400 in the upper circle, 600 in the gallery and there were boxes containing a total of 25 seats.

Under new ownership in 1905, it became the Palace Theatre of Varieties. From 1st March 1909, it was taken over by Oswald Stoll for Stoll Moss Empires Ltd., and became the Alexandra Theatre once again. Oswald Stoll was still in charge in 1917, when it was operated as part of the Hackney and Shepherds Bush Empire Palaces Ltd. It had been equipped to screen films as part of the variety programme and by 1922, it was presenting cine-variety programmes. There were also film matinees and films were screened exclusively on a Sunday only (as live theatre performances were forbidden by law on this day)

In 1932, it was owned by Standard Cinema Properties Ltd. and had become a full time cinema. It was taken over by independent management in 1934, and the Alexandra Theatre was finally fitted with sound equipment, in this case a Western Electric system. Sunday films continued for many more years, with a mix of variety and plays performed on weekdays.

The Alexandra Theatre was mainly closed during World War II, but when it did reopen in 1945, booking regular live programmes were difficult, and it survived on a diet of boxing matches, Yiddish theatre productions and occasional special events. The Alexandra Theatre was closed in October 1950. It lay empty and unused for many years, and was demolished in the early-1960’s.

A nine storey tower block of council flats named Alexandra Court was built on the site.

The ground floor of the current building is the local probation office, which was attached to the local(now defunct) Magistrates Court directly opposite.