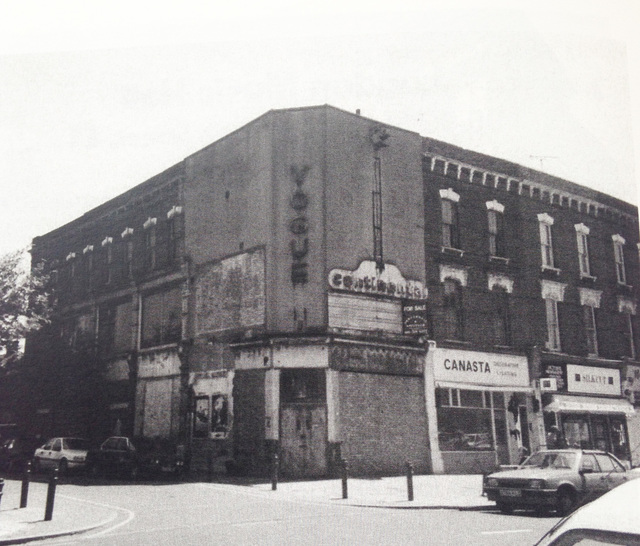 Located in the north London inner city district of Stoke Newington. The Electric Palace opened in December 1910. In 1915 it became the Majestic Cinema, with a seating capacity of 700 on one level. The corner entrance was a conversion of an end of terrace shop unit with the auditorium constructed behind. By 1937 it was operated by the D.J. James Circuit.

By 1940 it had been taken over by Capital & Provincial Cinemas Ltd. and re-named Vogue Cinema. Capital & Provincial Cinemas Ltd. became Classic Cinemas and specialised in re-runs of classic Hollywood films. It had become the Vogue Repertory Cinema by 1945 and the seating capacity had been reduced to 451. In the mid-1950’s it went over to screening mainly foreign films and was re-named the Vogue Continental Cinema.

It closed on 21st June 1958 as a protest by Classic Cinemas against the landlord’s rent rise. The last programme to be screened was Katharine Hepburn in “The Little Minister” and Noelle Middleton in “You Can’t Escape”. The building was shuttered and remained so for 42 years! It was thought by cinema afficianados that the Vogue was the longest closed-down/unused cinema building to exist in London. Signage still hung onto the building proclaiming it to be the Vogue Continental Cinema, although most of the neon tubing had been broken.

In November 2000 work began to demolish the auditorium to build three housing units and convert the foyer of the building into a restaurant. This became a Turkish restaurant named Testi. A nice touch by the new owners was to restore the ‘Vogue’ vertical sign.

A great name for a restaurant! Do you think they made a bit of a ‘balls up’?

Update – The cinema opened in December 1910 – i have added a press ad from the Hackney Spectator from that date. The cinema opened as the Electric Palace and was designed by Gilbert Booth, it became the Majestic in 1915 and after passing through several companies it was Capital & Provincial News Theatres who renamed it the Vogue in 1938, it was run as a sister cinema to the Classic in Dalston which shared a similar continental film programme.