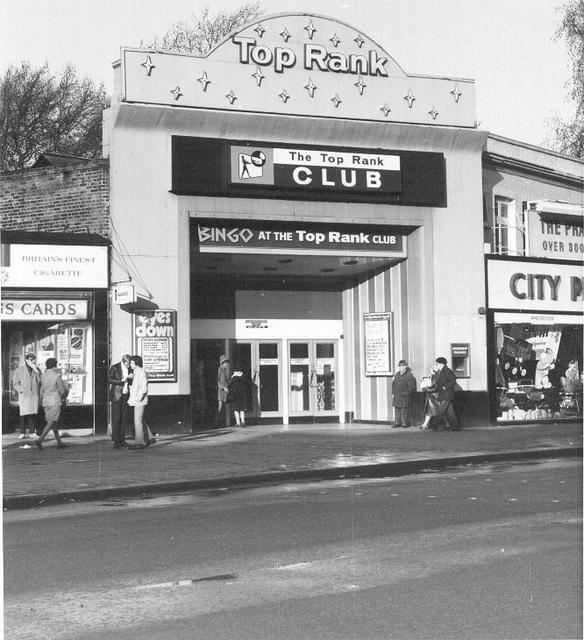 Located in the inner north London district of Finsbury Park. What we have here is the history of two buildings which became linked as one, then seperated again.

Montague Pyke opened this on 2nd October 1909 as Pyke’s Cinematograph Theatre, 269 Seven Sisters Road located almost adjacent to the main entrance of Finsbury Park. It was the second theatre he opened, in what would become a small chain numbering sixteen in total. The building had originally been the entrance-way to the horse drawn tram depot located at its rear. An elaborately decorated entrance facade was created which led into the rather narrow auditorium which seated 650 on a single floor. It closed as a cinema in 1915.

Located around the corner from Seven Sisters Road at 10 Stroud Green Road was the former horse drawn tram depot. It was converted into a roller skating rink (which never opened, due the a wane in the craze of roller skating). Instead it opened as the Rink Cinema on 1st October 1909. The architects for the conversion were Fair, Mayer & Marshall. Initially seating was on one level, but in 1916, architect Edward A Stone designed a balcony for the building which gave a total seating capacity of 2,800. A standard Thomas Jones organ had been installed in 1915.

In May 1920 the original Cinematograph Theatre (which had a far superior location on Seven Sisters Road) was incorporated into the larger building and converted into a new foyer to serve the Rink Cinema and it became known as the Finsbury Park Cinema for a short while. It reverted back to the name Rink Cinema and was operated by Associated Picture Houses, later Provincial Cinematograph Theatres (PCT). It boasted a large cafe/restaurant which was located in the new foyer space and on Stroud Green Road there was also a secondary entrance to the front stalls using the Rink’s former main entrance.

On 14th June 1923 it became the first cinema in Britain to give a demonstration of the De Forest Phonofilms ‘sound on film’ system, which later became Fox ‘Movietone’. In 1926 a Model ‘F’ Wurlitzer theatre organ with 2Manuals/8Ranks was installed. From February 1929 PCT were taken over by Gaumont British Theatres, but the cinema retained the Rink name for many more years. The Rink suffered slight bomb damage during the war and the organ was removed.

It was eventually re-named Gaumont in August 1950 and closed on 12th July 1958 with Mara Corday in “Undersea Girl” and Mel Ferrer in “Fraulein”. The building was converted into the Majestic Ballroom, which opened on 20th August 1959. A few years later in the early-1960’s it was converted into a Top Rank Bingo Club which continued until closing in September 1984 when the bingo operation was transfered to the former Gaumont/Odeon in Wood Green.

The original Pyke’s Cinematograph Theatre/later main entrance, became un-used and was demolished in 1999. It is unknown why, because nothing was built on this plot of land until around 2006, when a Netto supermarket was built.

The original Rink Cinema/later main auditorium, became a snooker club and since the late-1990’s has been converted into a Ten Pin Bowl known as Rowan’s, using it’s original Stroud Green Road entrance.

A vintage view showing part of the Stroud Green Road facade, in use in the early-1960’s as the Majestic Ballroom:
View link

Interesting article about the shadey going inside in the balcony https://www.theguardian.com/uk/2011/apr/28/archives-scandalous-goings-on-london-cinemas