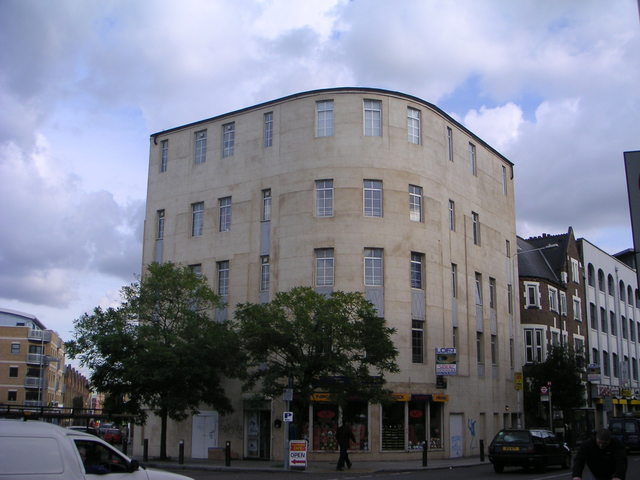 The Luxor Cinema was built on the site of St. Stephen’s Church on the corner of Commercial Street and Quaker Street opposite the now demolished Bishopsgate railway station. It opened on 2nd January 1933 and was operated as part of the small East End based George Smart circuit.

The cinema had a striking Art Deco design on its corner entrance with a white Portland Stone clad facade. Seating in the auditorium was in stalls and balcony.

The Luxor Cinema was a short lived cinema, as it seems to have closed soon after World War II broke out in 1939. In later years it was used as an auto-repair shop in the auditorium area (with all decorative features removed) and retail use in the foyer. In 2003 the auditorium had been converted into a refurbished residential unit of several flats/apartments known as Hollywood Lofts. Retail shops remain in the old street level foyer area.

A photo I took of the building in the summer of 1994:
View link

A current 2004 view of the building converted into Hollywood Lofts, courtesy of Richard Norman:
View link

There is a short article about the opening of the Luxor in an edition of “Cinema & Theatre Construction” magazine from 1934, a couple of years earlier than suggested above. The building was damaged during the blitz – probably in 1940 – and listed as closed in 1941. Owing to its location in an area of businesses and warehouses, it was always a bit of a white elephant, which was probably why it never reopened.