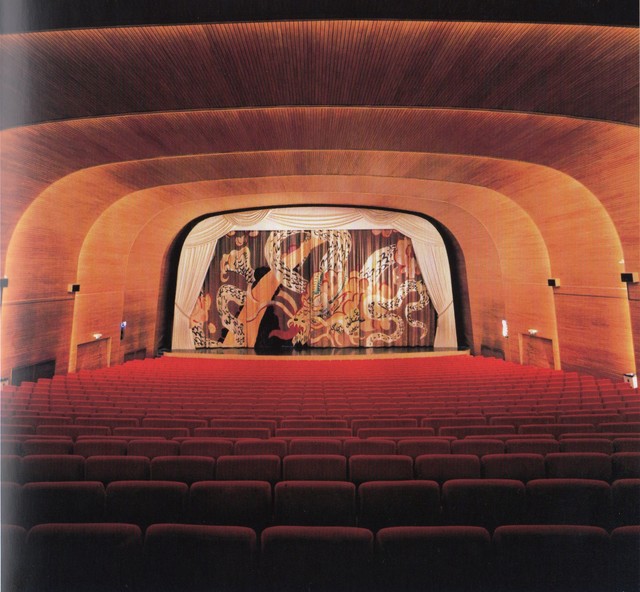 The Draken, or Dragon cinema opened on 27th September 1938 with Ingrid Bergman in “A Woman’s Face”. It was designed by architect Ernst Gronwall, who had earlier designed Stockholm’s Victoria Cinema. The sleekly Art Moderne/Streamline Draken was stunningly modern for its time, with sparse decoration but letting the actual design of the architecture be the decor itself. Its highlight is the six-arched auditorium, which contained 1,125 seats.

The six arches span the length of the audtiorium, forming a tunnel-like effect, with ceilings covered in beechwood paneling and lighting fixtures decorated with sylized letters S & F for the cinema chain. Originally, the seats were colored deep red, but these were later replaced. The greatest piece of decor is its magnificent stage curtain, the largest in Sweden. It was created by painter Issac Grunevald, and depicted a modernistic dragon on a background of multicolored silk. The dragon motif is repeated on the marquee, on a fabulous neon dragon with a long red tongue designed by Rudolph Persson, who also decorated the Victoria Cinema. The brightly colored neon dragon has now become a symbol of the city appearing on everything from postcards to toothpaste tubes.

The Draken unfortunately was closed by SF in 1996 due to dwindling audiences and the fantastic curtain was removed and is now hanging in the Filmstaden center in Malmo. The seats in the auditorium have also been taken out. City authorities refused to grant the Draken landmark status as was expected in 1997, and another application for listing was refused in August 2000. The future of the building is currently undecided, but either way, the owner has made it known he intends to preserve the famed neon dragon on the marquee no matter what the fate of the cinema is.