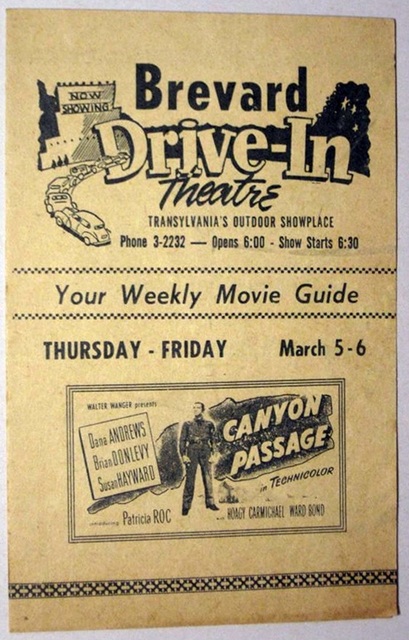 Small drive-in located in the mountains just outside of Brevard. It was opened prior to 1955. After closing, it sat vacant until about 2004 until it was replaced by an outdoor sports complex.

Going to steal your book Mike.

Edward (or E.M.) Marks was co-owner of the Brevard Drive-In in the early 1950s but if he also owned the Star Drive-In it was not in 1956. By 1956, Marks was in Wilmington, NC overseeing the drive-in theatres there (including the Starway).

I was going by my 1956 Motion Picture Almanac for research.Patricia.

Hello Mike – I believe, though not 100% positive, that Edward Marks would have been gone from Brevard by 1954. Guess the Almanac runs somewhat behind (makes sense considering it would have to be compiled in advance). Cool – didn’t know there were Motion Picture Almanacs.

Yes PatriciaNC,Mike is the man.They were first called “REEL AMANAC>

PatriciaNC,Found mine in an old theatre along with two Television Almanacs from 1960 to 61,they cover everything about TV stations in the U.S. and they aren’t small all of them including the Motion Picture Almanac have over 900 pages.I saw on a site on CT where you can buy the same book I have or another year.have no idea where it was at,but someone was selling them.They are Hardback books.

Thanks Mike for the info. I did confirm that Edward Marks was gone from Brevard by 1954 – in fact, he was gone by 1953, so those Almanacs were definitely behind. (or they didn’t update them carefully)

Mike, I am new here to this site and I love it! Can you give me any pointers on “how to navigate” CT? Are email addresses available? Any info you have would be appreciated! Jeff in Texas

This drive-in was located at 1004 Old Hendersonville Highway, It is now Jdi Solutions.