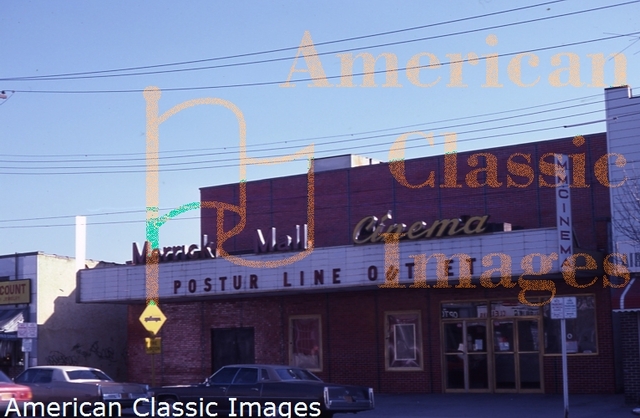 Although it was not in a mall, this modern theatre was opened on December 12, 1967 with Audrey Hepburn in “Wait Until Dark”. It featured a wide modern marquee similar to the RKO Rockville Center. Inside, the theatre had 625 seats in three sections all on one level and a large ‘scope screen.

This listing is incorrect.

The Merrick Mall Cinema was in the 100-200 block of Merrick Avenue. The reason it was called Merrick Mall was because of the open air “mall” row of stores behind the theater, anchored by L.H. Martin and Beefsteak Charlie’s.

The address 1692 Merrick Road was for the Holiday Park (Twin) Cinema.

A shot right after it stopped showing movies
View link

The Merrick Mall Cinema is now predominantly occupied by a restaurant called Thai Station, with an address of 2161 Merrick Avenue. There is also a bridal shop and hair salon in storefronts along the former lobby portion of the building. The bridal shop has an address of 2165 Merrick Ave, while the hair salon, which occupies what would have been the actual entrance to the cinema, is listed at the old address of 44 North Merrick Avenue. Seems that the village has been re-numbering addresses along both Merrick Avenue and Merrick Road – see comments in the listing for the Gables Theatre.

My guess is the hair salon was allowed to grandfather the old address for business purposes and that 44 N. Merrick Ave may have been the theater’s address.

Also corrected the street view image. We won’t be able to change the google map location without utilizing a valid address for the building.

Photo after closure but before conversion to retail

Even at the end this was a really nice house that never seemed to thrive.