Opened on August 12, 1965 with James Stewart in “Shenandoah”. I only became aware of it in the early-1970’s while attending Georgia College in Milledgeville. In those days, the Westgate and the Riverside Twin were the places to go for first run fare in the central Georgia area. I do know that it started out life as a single screen, was twin and later the smaller side was twinned into auditoriums of about 350 and 450 seats. The other original auditorium was much larger and had about 1,000 seats.

The theatre itself was free standing in the parking lot of the Westgate Mall. I never saw the booth or anything else of the operation since my only contact here was as a customer. My first visit was in November of 1973 for “American Graffiti”. I also saw such hits as “Magnum Force”, “The Sting”, “Jeremiah Johnson”, and “The Towering Inferno” here.

One thing I thought odd at the time but which made perfect sense later as I learned more about the business end of movie theatres, was the fact that the bigger the hit, the smaller the theatre it played in. The reason for this of course was the sliding rental scale for pictures. In those days a picture would play exclusive run at a theatre for weeks or even months. This was true in Atlanta and especially in a smaller city such as Macon. Since the film rental rate started at 90% and gradually reduced to 35 to 50% at the end of the run, it was in the interest of the theatres to do as much business as possible at the cheaper end of the run.

In the case of a big hit like “Inferno”, unless you were willing to drive to Phipps Plaza in Atlanta, you had to see it at the Westgate even if it meant waiting four or five weeks for the crowds to die down. If they had put “Inferno” in the big house, everyone in town who wanted to see it would have gotten in before the Christmas holidays were over and the theatre would have been left with a dead movie for the remainder of its run having done all of the business while the film rent was 90%.

The glory days for the Westgate were about over when I was attending movies there. The newer Weis Riverside was a nicer theatre and located in the growing part of town. In about 1977 the Macon Mall was built where GTC opened a brand new quad and started putting their booking efforts there. On December 21, 1979 the Westgate was transformed into a sixplex. I do not know the details, but I am sure they just split the 1,000 seat house. It was closed in 1996.

I’ve updated the street view(hopefully) to show the actual building. It is now a furniture store. On the backside of the building which is facing Eisenhower Parkway, the exit staircase from one of the auditoriums is still there.

Westgate was the first theater outside of downtown. I remember going to the Weatgate in the early 60’s. 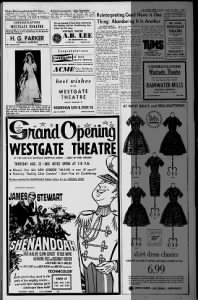 Became the Westgate Cinema Center with 3 screens on February 25th, 1972. 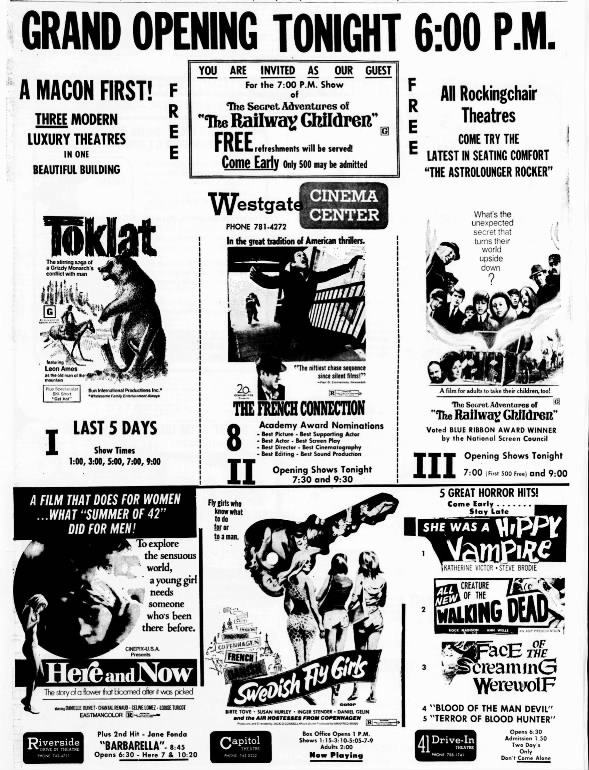 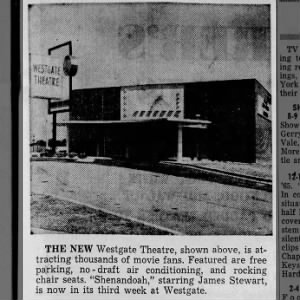