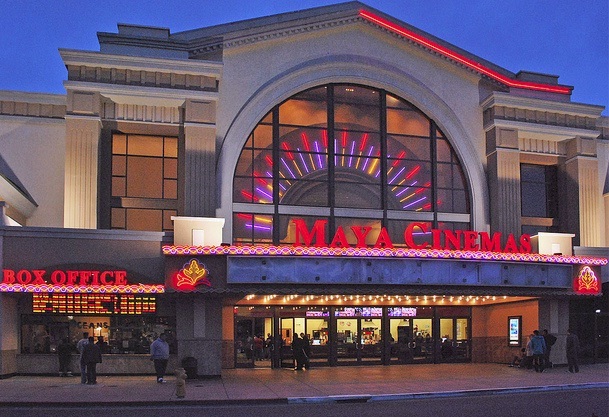 Part of the facade of the Maya Cinemas is a replica of the facade of the Crystal Theatre, which was a 1930s art deco remodeling of the 1910 Brown’s Opera House, which was demolished—along with several other adjacent buildings—to make way for the new cinema complex. The replicated Crystal facade and vertical sign (which reads Maya Cinemas) is quite competently executed. This writer, however, wishes that the original facade had been preserved and incorporated into the new structure, as was the original plan. Still, replication is better than having lost all trace of what was once there.

Here’s my photo journal of the Maya Cinemas construction and the opening day ceremonies:

The Crystal Theatre (nee T & D before the new T & D/“Fox” Theatre was built in the 200 block in 1921)was on the north side of the Maya complex. On the south side of the Maya stood the nickelodeon White Theatre which had long since been coverted into a men’s clothing store. The theatre was virtually intact whne demolished. Even the proscenium opening, though borded up, was still there. The small stage had been converted into an office for the store.

The Crystal, as noted by Gary, was originally the Brown’s Opera House and then the T & D enterprises took over the building. When the new T & D was opened, the old theatre was closed for a period of time. It eventually reopened as the Crystal.

I’m glad the Crystal is still a movie theater. I haven’t been to Salinas downtown to see it yet (although I am in the area for Christmas every year). I hate the cineplex out at the Salinas Mall, so hopefully this new theater will be a treat and bring a lot of business to that cute downtown area.