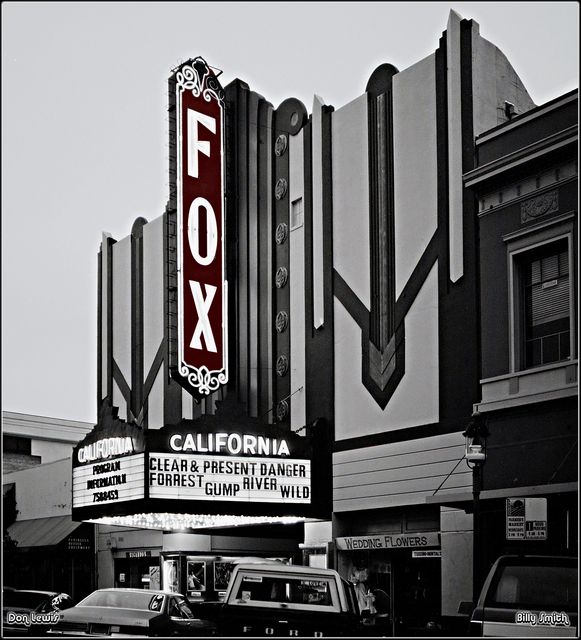 The T & D Theatre opened on November 10, 1921 with a vaudeville Minstrel Show. It was designed by architect Albert W. Cornelius. It was was sold to Fox Theatres in 1930, being renamed Fox California Theater and remodeled by architect Alexander A Cantin in 1935. It was later remodeled possibly by Carl G. Moeller in 1949.

After many years of closure, it has re-opened as a live performance venue and was refurbished in 2002.

I’ve been working on the Fox Theater Salinas web site for the new owners (www.foxtheatersalinas.com) and I’d love to have a few of the old pictures for the history page. Can anyone help me? I’m a transplant to Salinas – by the time I got here it was redone. What I’d really like are the old black and whites like the one one this page (or permission to use that one if anyone knows how to contact the owner).

Holly: contact me below, and I can steer you in the right direction re. those historic photos.

Already did it Gary.

I just visited Salinas on August 8, 2008, and took a ton of pictures of the Fox California Theater, including the front, sign, ticket booth and interior.

The L.A. Library’s California Index contains a card citing an item in the May, 1935, issue of Architect & Engineer which said that architect Alexander A. Cantin had prepared the plans for remodeling the T&D Theatre in Salinas, and that the house would now be called the Fox Theatre.

I can’t find anything about who did the 1949 remodeling, but my guess would be that it was Charles Skouras’s favorite designer of the era, Carl G. Moeller.

Here is the ticket booth in 2009:
http://tinyurl.com/y4qgbar