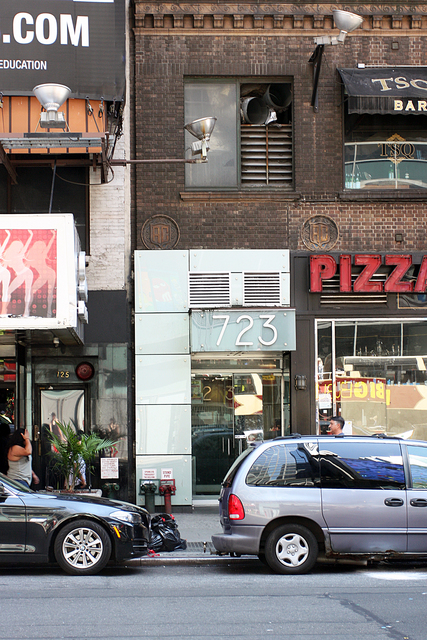 In one of the Times articles, an Ellwest employee describes both theaters as exhibiting only “soft, soft-core pornography”, while another boasted of their cleanliness and decor of “wall to wall carpeting and red drapes”. NYPD officers were not impressed with either theater’s appointments and confiscated film from the projection booths that a judge deemed to be unquestionably hard-core.

According to one Times article, the 7th Avenue theater was to have been evicted from its premises (as was Chelly Wilson’s Eros 2 on 8th Avenue) by March 28th, 1973. An article from July of that same year, however, notes that the State Supreme Court had ruled favorably for the Ellwest and issued a restraining order against the police sergeant who had been spearheading the campaign against the Ellwest and other local adult establishments.

Yes, I believe so, Lost. Actually, thanks. At the very least, it is the same space – whose to say if proprietorship changed over the years? The other Ellwest Stereo on West 47th had 35 seats, so they would have been roughly the same size.

This building is the corner property on the northeast corner of Seventh and 48th Street. The main store-front on this site has been a deli for many years – currently Maxie’s Delicatessen. Adjacent to this is 725 Seventh, home of the infamous Metropole Cafe – which started as a jazz club in the 1920’s or ‘30’s and continued as such until the 1960’s when topless go-go girls were added to the entertainment fare. Interestingly, in the building that housed the Ellwest, it seems that a “film vault” was located on the top floor (the 13th I believe) according to C/O’s dating back as far as 1921.

Also a note about Ellwest that I posted in the other listing; it seems they ran a number of porn houses in cities across the country (Seattle, Dallas, Phoenix, Memphis) during the ‘70’s and '80’s. A search on the internet returns a number of legal decisions stemming from tried cases in various State circuit courts. I imagine the partners involved in Ellwest Stereo Theaters devoted a great deal of their revenue towards legal fees. Not sure if this led to their demise. I find no other theaters listed on CT with this name – not to say they aren’t listed under other names.

Not sure the theater closed in ‘73, Lost. While an eviction date was set for March 28th of that year, a Times article from July of '73 indicates that both theaters were still in operation when a State Supreme Court Judge issued an restraining order in favor of Ellwest Stereo Theaters against the police sergeant that had been aggressively conducting raids on adult establishments in the area. Perhaps this was still the Ellwest in '74 when the C/O was issued.

Thanks for that Vaughn. It seems – as I found when using Google to get info on Ellwest – that they had a number of locations around the country and were subject to their fair share of legal entanglements. I did not know, however, that their empire extended to Jacksonville.

Please don’t ask how I know this but the Ellwest places weren’t actually theatres but rather storefronts with booths. Each booth had it’s own .25 cent, 8-mm projector with the film on a loop. As far as Times Square is concerned, they were never theatres in any sense of the word and probably should not be included on this website.

Fair point, Bwayniteowl. Thanks for the clarification. I’ll leave it to the webmasters to decide if this listing should remain or not.

There was also an Ellwest in Kansas City.