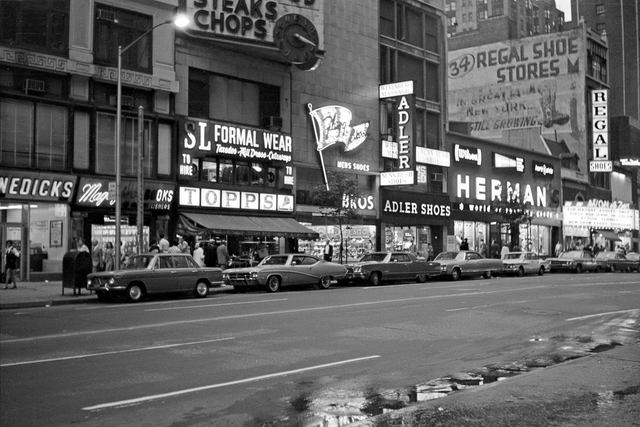 The Avon 7 was one of a number of so called “mini cinemas” that opened in converted retail or office space in the late-1960’s and early-1970’s. Like all of its “mini” cousins in the Times Square area, the Avon 7 featured hard core pornography. Located in the old Studebaker Building, the Avon 7 was opened on August 7, 1970, and lasted well into the 1980’s and possibly into the early-1990’s.

The Studebaker building was recently demolished to make way for a high-rise condo complex known as 1600 Broadway (the Studebaker’s main address).

I remember Film Charas listings in the NY Times or maybe the Voice as recently as within the last couple of years, Al. I couldn’t find a current listing, but there is a now empty page for the theatre at movietickets.com and this website still lists the venue – though no schedule is available.

The Moulin Rouge Triplex listed in the ‘85 Voice at 777 Eighth Avenue shares the same address as the Hollywood Twin. In the early '80’s, there was a listing for the Night Shift Theatre (later Nightshift 1 and 2) at that same address. The Night Shift operated upstairs over the Hollywood Twin. Perhaps it had morphed into the Moulin Rouge Triplex by 1985.

Show Palace was located across Eighth Avenue from Show World between 42nd and 43rd Streets and both establishments were owned by Richard Basciano – in fact, Show World continues operation to this day, though in a smaller space than in its heyday. Show Follies was in the old Cine 1 & 2 (which is listed on CT) on Seventh Ave – sandwiched between the DeMille and the Doll – and was also owned by Basciano. I thought of adding the two Eighth Ave venues to CT at one point, but I wasn’t able to verify beyond doubt that either of them had ever screened actual films. I believe they were known mostly as “live” peep-show venues with video booths.

Ed, these were all advertised as showing features albeit some on video. I am aware of Show Palace as a video/peep/book store but I was unsure it ever screened films until I saw these ads.

Show Follies and Jocx do not show as previous names for Cine 1 & 2. I seem to recall a third screen upstairs when it was the West Side 1 & 2 which may have been the Jocx. It struck me as odd then that there was a male theatre upstairs when the venue was a Disney outlet in Times square. I figured Disney accepted the run out of desperation due to their alliance with City Cinemas elsewhere.

Just curious about that Tom Cat listing you note from the ‘85 Voice. That address of 1207 West 48th Street would place the theatre somewhere in Union City, NJ, so I presume it’s a typo. Was the Tom Cat around the corner from the old Grand Pussycat Theatre on Broadway and 48th?

The Avon 7 and the Frisco.

I think the comments from Ed Solero and Lost memory on the Paree page about multiple screening floors at this location and at the Frisco may explain how the Avon 7, Mini, Frisco, and the last incarnation of the Park-Miller may have all operated from this site with overlapping dates.

As a young adult I attended an evening of TV premiere showings at an Avon Theatre which was located on one of the main avenues. This was probably in the 1950s. You could tell it was an older theatre because of the boxy styled marquee. I’m sure it wasn’t this one, and certainly not the one of 42nd Street. So either it hasn’t made it to CT or it’s one of those also known as entries which would be almost impossible to find. Any thoughts out there?

rvb, that would have been the Avenue.

Thanks. I never would have found it in a million years.

That is my post. After Al Alvarez directed me to the Avenue site I made my comment.