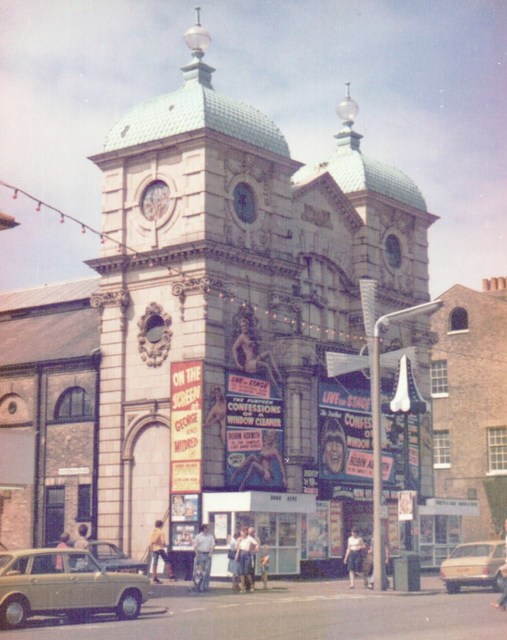 This is one of the United Kingdom’s earliest cinema buildings. It is thought it was intended to be a menagerie for displaying wild animals when first built. But it opened as a cinema known as the Gem Theatre on 4th July 1908 with the proviso that men and women sat seperately on each side of the auditorium! Theatre manager and producer C.B. Cochran was the lessee and manager. It had a magnificent display of electric light bulbs attached to the front of the building which gave it the nick-name ‘Palace of Light’.

Showing films for most of its life, it was taken over by Ben Jay’s Circuit in 1938. It did stage summer shows occassionally from 1948 when it was re-named the Windmill Theatre. Films and occasional live stage shows continued into into the 1960’s. By the 1980’s it had closed and was in use as a children’s indoor play area.

It later became an attraction named the Odditorium (similar to Ripley’s Believe It or Not) which also had a cinema upstairs. Today the building is in use as an amusement arcade with slot machines, etc. and a minature indoor golf centre. Some of the interior decoration has been hidden by false walls drapes. The building is Listed Grade II*

This wasn’t built as a cinema. It was built as the “Palace of Light” for the showman C. B. Cochran, and opened 4 July 1908. It originally had 1,000 light bulbs on the exterior. Cochran was well-known at the time, and presented all kinds of live performances, usually called “Cochran Revues”. However, he didn’t present films. It was renamed the Gem in 1910, which is when it probably became a cinema. Incidently, there are hardly any purpose-built cinemas with original frontages dating from before 1911. The front of the Picture House in Birmingham survives. The Electric in Portobello Road, the Bedford (Edit: since demolished) and the Kensington, both in Liverpool survive. All 3 opened in December 1910. There might (arguably) be one or two more from 1910, but it has to be admitted that original cinema facades are now an endangered species.

Ran by the Jay family from 1938 including the golf centre.