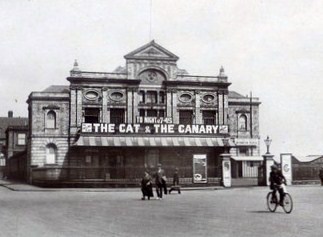 This imposing building was errected in 1875 and at first was used as an aquarium and later in the main hall for summer shows, pantomimes and roller skating. It underwent a re-build by local architects Bottle & Olley in 1882 and re-opened in 1883.

This brought about use as a theatre and many famous artistes appeared here; Lily Langtree, Helen Terry and Oscar Wilde. By 1914 it was screening films as part of the Variety programmes. In the 1920’s it had converted fully into a cinema and was still known as the Royal Aquarium with a seating capacity of 1,500.

In July 1982 the main hall was re-named Royalty Cinema and seating was now provided for 1,180 with the Little Cinema seating 264.

In recent years the building has been re-named again and is now known as the Hollywood Cinema, first with 4 screens which seat 500, 250, 200 and 200 and a fifth screen was added, giving a total capacity of 1,150-seats.

Sadly, it was reported on 7th February 2019 that the Hollywood Cinemas circuit had been put into administration. Two of the cinemas in the circuit - this one closed on 7th February 2019 and the former Odeon at Norwich- closed on 9th February 2019 (although the administrators are looking for buyers). The third cinema in the circuit at Dereham, was quickly acquired by a new operator. Hollywood Cinemas owner Trevor Wicks said the reasons for the demise included “a very poor 2018 with the ‘Beast From the East’ (extremely bad weather in February/March 2018), the Football World Cup and the long, hot summer, plus high levels of competition in the local area and a number of poor-performing films in recent months”. This closure is especially unfortunate as it follows a revamp in late-2017, involving new seats and screens, which was hailed as a vote of confidence in the resort, with Mr Wicks saying “that things were looking up in the town. But now a major seaside resort has lost its only cinema. Let’s hope a new operator will soon take this on”.

Happily, a new operator did step forward. In June 2019 it was announced that Irish-based Arc Cinema group would be taking over the cinema and undertaking a multi-million Pound luxury refurbishment which would include recliner seating, a new state-of-the-art sound system and 4K digital projection.

Peter Jay, the buildings' owner, said he was “delighted this rapidly expanding chain had put faith in our seaside resort to invest several millions of pounds. They have realised Great Yarmouth is on the up and will become one of Britain’s premier resorts once again”

This was the Arc Group’s first UK opening, with other sites (Daventry, Northamptonshire & Peterhead, Aberdeenshire) already announced as part of their expansion into this (for them) a new market.

A couple of exterior photos here:–

and a picture of the original ceiling long hidden away :–

In late 2013 it was announced that two further screens were to be added, and the area in front of the cinema would be fully pedestrianised. However, by August 2014, neither of these schemes had taken place.