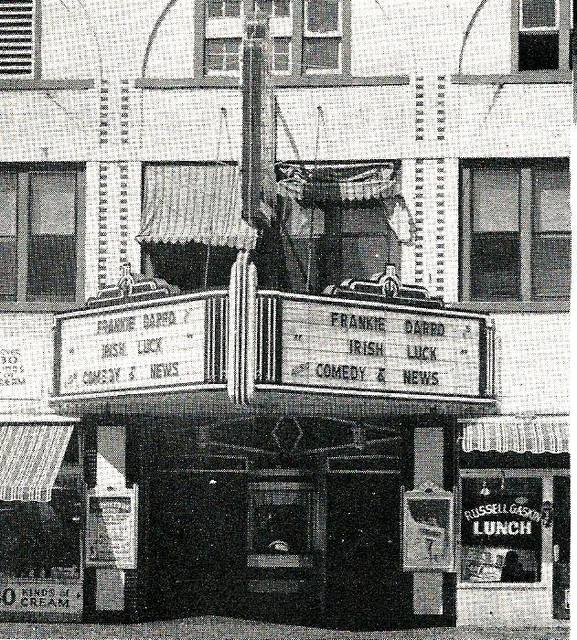 The Roxy was mentioned over on the Ritz page, I think.

I made comments concerning the movie theaters in Blytheville on the Ritz page….hope they help.

This puzzling page (the words are English, but the syntax might as well be Martian) says that the Home Theatre that became the Roxy was at 106/108 West Main Street. I’ve been unable to find anything about a Home Theatre on South Broadway.

The Ritz was one block west of the Roxy. The Home (later the Gem and finally the Theater Fiestro) was across Main st in the same block as the Roxy. The Ritz no only had a smoking loge but also had a TV room…..quite something in 1951 as few homes had TV. I remember people buying tickets to watch TV. The Ritz was advertised in the Blytheville Courier Newspaper as ‘One of Arkansas’s Finest Theaters" and it was. I worked ther during my high school years and loved the place so much I evern hung out there on my day off. I worked with Johnny Glasscock, James and Tallmage Lloyd, Ruby Brothers, Jeff Sharpe and Cowboy. Projectionest were Henry Youngblood, Budd LeVann and Norman Speck. James Lloyd also ran the Starview Drive-in during the summer months. The lady selling tickets forever was Miss Elizabeth Sweat….she had a very distinctive R-I-T-Z T-H-E-A-T-E-R when answwering the phone. The manager was Ms. Audrey Nell Freeman, who cut a distinctive figure with her long cigarette holder, black horn-rimmed and jet black hair. The fantastic, neon laden marquee was distroyed when Blytheville changed Main Street so that it zigged and zagged…..aparently a large truck zigged when it should have zagged and wiped the beautiful marquee out. I think the Ritz belonged to the Malco chain by then and the marquee was not restored. For may years the building has only the blank front. I think James Lloyd may still work for the Malco chain in Memphis. I was present at the Grand Opening in 1951 and remember the gayla event. Search lights, highschool bands and a limo arriving with Mr. McClutchen, (the owner), his wife and Ward Bond. I was 5 years old and fell in love with the Ritz that night….a love affair the continues even now. I think I’m in the picture printed in the Courier showing the opening crowd. Thanks for a chance to relate my memories. JR (Jimmy) Honeycutt

James, was the Roxy you remember located in the building in this photo? I’m a bit confused by the photo, as a 1933 article in the Blytheville Courier featured a photo of the house then called the Roxy, and it looks like a different building than the one in Don Lewis’s photo at Flickr. The 1933 Roxy was three floors instead of two, and the second floor had much wider windows than the building in Don’s photo.

The only explanations I can think of are that either Don got the caption wrong, and that building never was the Roxy, or the Roxy name was moved to that two story building sometime after 1933.

Also, the Courier article says that the Roxy of 1933 had been called the Home Theatre prior to being renamed Roxy by new operators sometime in the winter of 1932-1933. If, as you say, the Gem Theatre was once known as the Home Theatre, maybe the name Home was used for two different Blytheville theaters at different times.

If you go to Cinema Treasures page for the Ritz Theatre, you’ll find a comment I made that has a link to a 1951 article in Boxoffice about the recently-rebuilt Ritz. It has a photo of the opening night crowd. Maybe it was the same photo the Courier published.

The 1933 Courier article I cited in my previous comment can be seen online here at NewspaerARCHIVE.com., which allows visiting non-subscribers to view three newspapers a day at no charge.

Joe, The Roxy had 3 floors and two double doors with a box office between them. I worked there along with working at the Ritz from 1960 until 1963. The Home theater was operated by McClutchen during the construction of the Ritz in 1950 but I never knew of the Roxy being the home.

James, your description of the Roxy definitely sounds like the theater in the photo in the 1933 Courier article. The photo is a bit fuzzy, but from the architectural style I’d say it could have been built in the early 20th century. This makes me wonder if it might have originally have been the 600-seat theater opened in 1908 as the Alford Opera House.

I used Google Street View to find the building in Don Lewis’s photo at Flickr, and it turns out to be at 104-106 E. Main Street, and currently has a pool hall in one storefront and the E & Z Clothing company in the other. If there was ever a theater in that building it wasn’t the Roxy, which was at 108 W. Main.

The Home Theatre launched April 18, 1924 and got its name from a contest winner announced March 20, 1924 by H.S. Foster who received an annual pass to the theatre. A fire in December of 1931 at the neighboring Smith-Simon Building caused the city to inspect the Home Theatre which was condemned though officially not for fire damage. The fire led to a lawsuit to determine damages to both buildings ($30k for Simon and $10k for Home Theatre).

The Roxy Amusement Company repaired the Home Theatre and renamed it the Roxy but, according to the news article, only operated it for a few months before selling to the most well known local movie house operators in Mr. O.W. and Mrs. May McCutchen of the Gem and the Ritz (and, later, the Starvue Drive-In). During the summer months, the Roxy was closed due to lack of air conditioning and the McCutchens would overhaul the Roxy having a grand re-opening in 1933. They had some air cooling now in place and spent about $10,000 refurbishing the Roxy.

In 1956, the Roxy was retrofitted to play CinemaScope and VistaVision amongst it widescreen offerings. Following the Saturday midnight showings of “Sun Lovers Holiday” on Sept. 24, 1966, there are no more mentions or bookings for the Roxy. In 1967, an evangelist hosts a revival there and that appears to be it for the veteran theater space.

There is some confusion about the location. Main St has been renumbered. On the 1921 map, the location of the empty lot where you would today expect to find 108 W Main is home to a commercial building with the addresses 225-229 E Main (odds and evens used to switch sides at the east-west divide, which was the railroad tracks/3rd St). The old 106-108 W Main is the location of today’s Ritz (with a 306 W Main address).