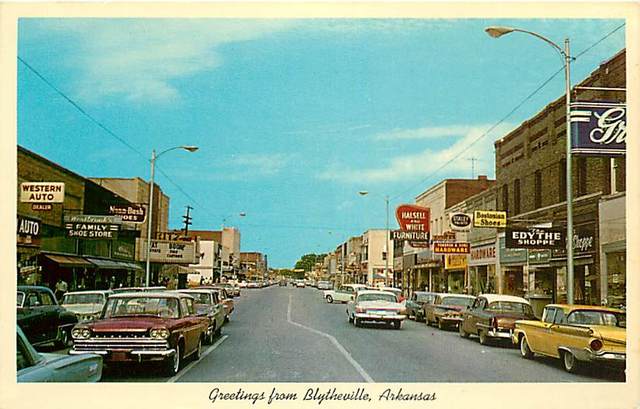 In the early-1990’s, the Ritz Theatre was restored to its 1951 appearance, and today functions as a venue for live entertainment, as well as movies. The Ritz Theatre, now the Ritz Civic Center, is also home to the Arts Council with displays in the theatre’s lobby area.

I grew up in Blytheville and I worked for the RGR theater chain while attending high school in the 1960s. During the 1950’s the town had 5 theaters. The Mox on West Main st was a second run theater operated by Mr. Moxley, the Ritz was about the 500 block of Main and was the premier theater, the Gem was a second run theater located at the corner of Main and Broadway and the Roxy was on East Main St. We had another called the Savoy which was a colored theater… By the time I worked in the movies in 1960 the Mox and Gem were closed. I think the Gem may have been the “Home” theater at one time. The lease on the Roxy was allowed to expire and the theater was run for awhile by the building’s owner Mr. Simon. The Ritz burned in 1949 or 1950 and I remember the opening night of the rebuilt Ritz (Feb 1951) We had high school bands, search lights and the movie star Ward Bond attended. The marquee loads of neon including chase red, blue and green tubes. I don’t think I’ll ever forget the excitement.

Opening night at the Ritz (Three Guys Named Mike) with photos, plus article on the theatre from Boxoffice magazine, March 19, 1951:
View link

Here is a fresh link to the 1951 Boxoffice article about the Ritz Theatre. The impression I get from the article is that the old Ritz was completely razed to make way for the new Ritz. The article doesn’t mention a fire in the Ritz prior to its demolition, though other sources mention a fire in 1931.

This photo shows the Ritz before the 1951 rebuilding. The Boxoffice article says that the adjacent space in the building was occupied by a shoe store and a grocers prior to rebuilding. Doubling the theater’s width would have required at the very least the complete demolition of the interior, and at least the center section of the old facade would have to have come down as well, to provide for the new center entrance. If all that was coming down, then the roof must have been removed too. That adds up to virtually an entirely new building between the old side walls.

The entry for Uzzell S. Branson in the 1956 edition of the AIA’s American Architects Directory lists the Ritz Theatre as a 1951 project. Our description currently says that he designed a 1936 remodeling of the Ritz, but this web page says that the Ritz was severely damaged by fire in 1931, and reopened in October that year after a $30,000 reconstruction job. It’s possible that Branson was the architect for that project as well, as his practice was established in Blytheville in 1923, according to the AIA directory.

The Ritz burned twice, once in 1931 and was rebuilt then in 1950 it burned again and that is when McClutchen bought the adjoining buildings and built the Ritz. The grand openig I attended was in 1951.

The Ritz burned twice, once in 1931 and was rebuilt then in 1950 it burned again and that is when McClutchen bought the adjoining buildings and built the Ritz. The grand openig I attended was in 1951.

The Roxy was a second run, sister theater to the Ritz. The building was owned by Mr. Simon and he operated it for awhile after the Malco chain obtained the Ritz and let the lease expire on the Roxy. The Roxy was later torn down but I had left Blytheville and I don’t know the year. I do not know if the Roxy was ever called the Gem but I doubt it. I remember the Gem was located on the SE corner of Main and Broadway in the same block as the Roxy.

Thanks so much to James Honecut for his most descriptive, nostalgic, and accurate word picture of the Ritz (but posted on the Roxy Theatre page). I remember all the people he mentioned (as well as James). One minor corretion: the manager of the Ritz, Roxy, and Starvue Drive-in from Mr. Mac’s death until Mrs. Mac passed away (when all their theatres were sold to the Malco chain) was Audreanel Freeman, my grandmother. Yes, indeed, she did cut quite a figure with that cigarette holder and jet black hair.

The information about the opera house is wrong. This space is an empty lot on the 1913 map. The 1921 map shows the Gem theater at this location, in a building that probably became the old Ritz as shown before the 1951 remodel. Confusingly, the old address was 106-108 W Main, which coincides with the current address for where the Roxy used to be.

This item about the new Ritz Theatre in Blytheville is from the November 14, 1925 issue of Moving Picture World:

“Mr. and Mrs. O. W. McCutcheon have been busier than ‘repeaters’ just before election day — but not in the same way, because these two up-and-doing folks have been getting the work finished up on their new Ritz Theatre, in Blytheville, Arkansas.

“They sent in an invitation to the opening. As the grand occasion was to be October 29th and the invitation just landed in the office on that day, it was too late. But from what I’ve heard of the ability of these folks, the opening was bound to be a great success.”