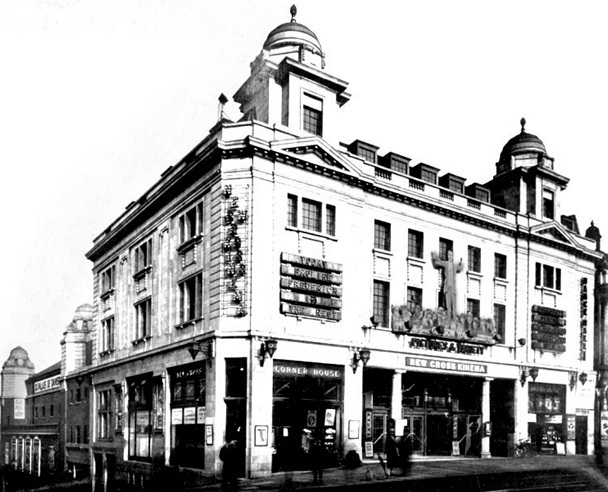 Located in the southeast London district of New Cross. Opened on 7th September 1925 with Betty Balfour in “Squibs”, attended by Betty Balfour in person. The main programme was Carlyle Blackwell in “Two Little Vagabonds” and Betty Compson in “The Fast Set”. It was first known as the New Cross Super Cinema with an original seating capacity of 2,300 and was an imposing building located on the main New Cross Road at the corner of Clifton Rise. Designed for pictures and variety, the stage was 30 feet deep and there were three dresssing rooms. It was equipped with a Wurlitzer organ. The building also contained the Palais de Danse dancehall and a cafe.

The name was shortened to New Cross Kinema from 28th February 1927 and it was taken over by Denman/Gaumont in March 1928. In August 1929 a Wurlitzer organ was installed.

Closed by the Rank Organisation on 27th August 1960 with Charles Chaplin in “The Chaplin Revue” and Harry Dean Stanton in “A Dog’s Best Friend”.

The building lay empty and derelict for several years. Eventually the auditorium was demolished and an office block was built on the land. However, the facade and front section of the building remained and was in used first as a supermarket and later as a furniture store on the ground floor, with the Venue Nightclub using the former dancehall and foyer spaces on the upper levels. Today the Venue Nightclub have taken over the entire remains of the building and externally it was restored in 2006, revealing the original glazed tiling which had been painted over in black paint many years ago.

here are some more details, mainly about the Nightclub but also a picture from the ‘20s which shows how much is now missing! View link

A set of 3 vintage photographs of the New Cross Super Kinema:
View link

Vintage photographs and one of the Wurlitzer organ console:
http://www.ukwurlitzer.co.cc/2057.html

I think the old New Cross Kinema had another local name during the fifties and into the sixties. It was not “the Gaumont”, although that was its official name, but something else. The immediate area at the top of Clifton Rise became identified by this other name of the cinema? Can anyone remember?