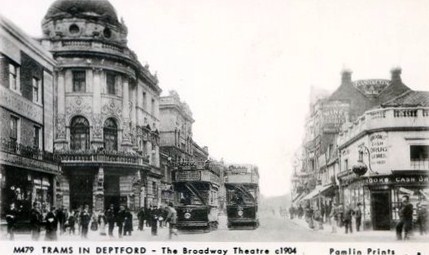 Located in the southeast London district of Deptford. The Deptford Broadway Theatre opened on 26th December 1897 with the pantomime “Cinderella”. Designed by noted theatre architect W.G.R. Sprague, it was located on New Cross Road as it merges into Deptford Broadway at the corner of Tanners Hill, opposite Deptford High Street. Having a street corner location, its exterior was very similar to Sprague’s Coronet Theatre in Notting Hill, which was built the following year, and was operated as the Gaumont Cinema for several decades, and is now back into live theatre use as the Coronet Theatre (it has its own page on Cinema Treasures).

Inside the auditorium, it had seating provided for 556 in the pit, 74 in the orchestra stalls, 96 in the dress circle, 156 in the balcony 450 in the gallery and 40 in box seats. The stage was 80 feet wide and 40 feet deep, and there were six dressing rooms.

Films were being shown as an overture to the play from 1908, and it was operated by Sir Oswald Stoll from 1909. It was he who converted the theatre into a full time cinema from 1911. Known as the Broadway Theatre, it was sometimes given a location of nearby New Cross, rather than Deptford. Edward Moss was the owner in 1912, and it was re-named Broadway Cinema from 4th March 1916. It retained its theatre licence until 1923, possibly just in case cinema use failed. By 1927 it was operated by the Clavering Circuit. It was operated by United Picture Theatres Ltd. in the 1930’s.

By 1937 it was operated by the Clavering and Rose circuit. It was taken over by the Granada Theatres Ltd. chain in May 1948, and was closed on 16th October 1949, to enable improvements to be carried out to the plans of cinema architect George Coles.

The Broadway Cinema re-opened on 21st December 1949, and it was re-named Century Cinema from 15th August 1955. Granada Theatres closed the Century Cinema on 30th April 1960 with Sid James in "Carry On Constable" and Joel Lawrence in "Roadracers"

The old theatre was demolished in March 1963, and the site has been redeveloped with a small parade of shops that are set back from the road.

A vintage photograph and further details of the Broadway Theatre here:
http://www.arthurlloyd.co.uk/NewCross.htm#broadway